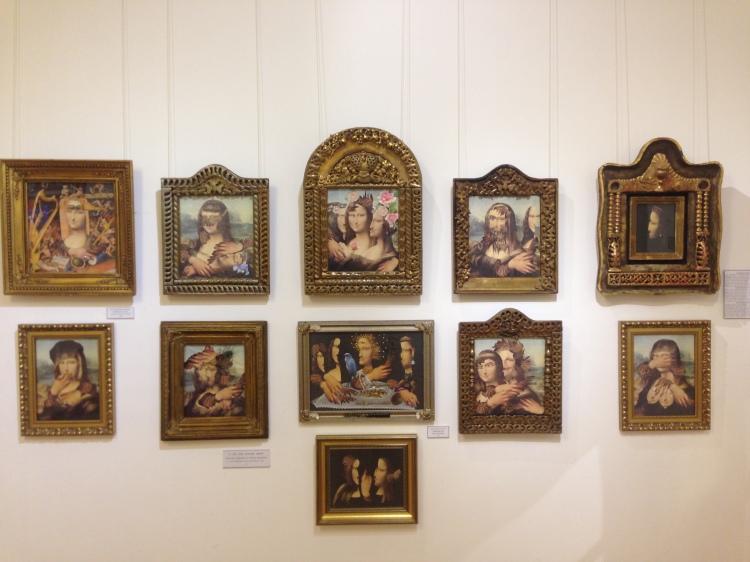 Imagine what might have happened if Mona Lisa was one of eleven sisters, all of whom were vying for da Vinci’s attention. In this fanciful tale, each of the sisters has their own individual magic powers, which she uses to charm her would be admirer. Their pursuits would then result in a series of unique portraits made by their besotted lover. Some of the images depict women with their heads cracking open, others with dozens of arms and hands gesturing to the viewer, and some are filled with flowers. The ladies smile coyly at the viewer, as though they know some mischievous secret that they have no intention of telling you.

These beguiling portraits have made their way into a traditional Caucasian house in Yerevan, Armenia, where they are now displayed as a group inside the Sergei Parajanov Museum, whose founder, Sergei Parajanov probably made the collages whilst in prison. For those who don’t know, Parajanov (1924-1990) was born in Tbilisi, Georgia to Armenian parents. Most famous for his film The Colour of Pomegranates, he was also an artist. Parajanov work in Tbilisi, Kiev and Yerevan and has been quoted as saying: ‘everyone knows that I have three motherlands. I was born in Georgia, worked in Ukraine and I’m going to die in Armenia’ – which he did. 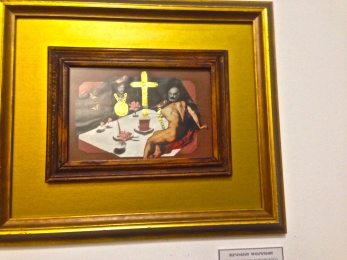 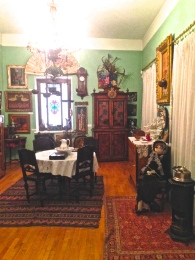 Parajanov’s individual style, which rebelled against socialist realism, had a focus on the visual, with limited voice acting. His reluctant to follow the accepted school of cinematography championed by the soviet regime landed the artist in prisons and labor camps on several occasions. Whilst incarcerated, Parajanov made several collages, dolls and drawings, many of which are on display at the museum in Yerevan.

The museum, which was founded in 1988 when the artist moved to Yerevan, is in the form of a traditional Caucasian house, complete with kitchens, bedrooms and dining rooms. Parajanov himself chose the location for the building himself, although it was not opened until 1991, following his death. Today the museum is tucked away from a busy road that overlooks Mount Ararat, a symbol of Armenia. Inside it is furnished with trinkets from the artist’s home in Tbilisi, and is completely covered wall to ceiling, in collages, paintings and drawings. There are also alcoves amongst the kitchen utensils and broken mirrors that display snippets of Parajanov’s films next to mosaics and skulls dressed in war helmets. 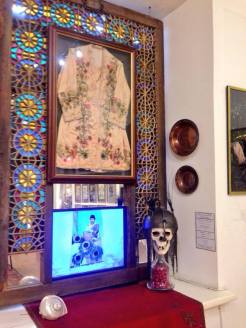 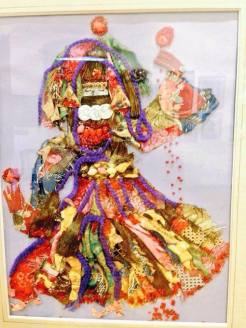 The artwork on display is bizarre and weird, but in a good way. Parajanov’s collages juxtapose religious themes with traditional Armenian history. In one mixed media piece the artist has inserted his own visage into a biblical scene, as though deifying himself. Opposing this are several dolls incased in glass, dressed in rich Armenian costumes. My favourite piece comprises a collage of an Armenian woman in a taraz -a traditional Armenian dress – complete with gold coins hanging from her forehead. Behind the figure, pomegranates are spread across the background, with seeds formed from tiny red beads pouring down the bottom of the page.

References to The Colour of Pomegranates are present throughout in the inclusion of lace and Armenian motifs throughout the images. There are even a number of works that directly reference the film, with stills from the movie based on the poems of Sayat Nova pasted into a number of collages. Parajanov’s Caucasian heritage and influence is clear throughout the museum, with pomegranates and Armenian carpets being the constant thread uniting each room together. Amongst the less Georgian and Armenian aspects, are many dolls, both in the three-dimensional form as well as two-dimensional images inserted into collages. At times they appear sweet, and at others, they seem sinister and unnerving. 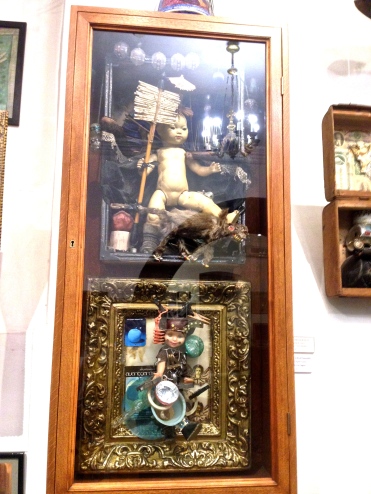 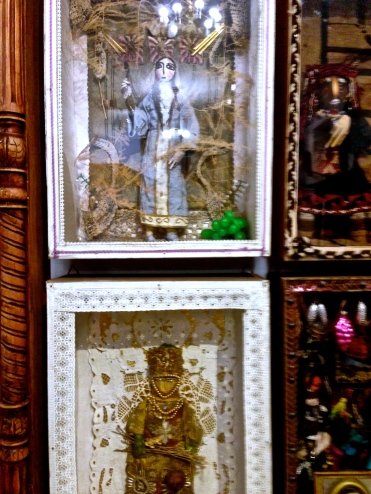 In the opening gallery to the museum is a shrine to Parajanov. Carpeted steps lead up to an alternative altar that presents the artist on a poster with the word maestro written above his head. The stairs to the artist’s image are laden with fruit and roses, and a pair of gold wings has been attached to the wall on either side of his portrait. While the staff working at the museum are almost as strange as the artworks inside it – they seem to stare at and follow you around the galleries, muttering stories under their breath – it is clear that they have a deep appreciation for the late artist. Whether you are a fan of Parajanov or not, this museum is sure to intrigue you and should be discovered if ever you are in Yerevan.

The Sergei Parajanov Museum is in Yerevan, Armenia