‘You can’t forget anything that hurt so badly, went so deep, and changed the world forever.’

Curation is an artform. Putting together objects and artworks in order to tell a story or reveal something that might previously have been hidden is a skill that is often overlooked. In Fred Wilson’s Afro Kismet exhibition at Pace Gallery in London a group of artefacts have been carefully selected to shed light on a part of the past that has evaded documentation that comment on the implications of ignoring certain peoples and events from history.

Kismet is the Turkish word for fate or destiny. Derived from the Arabic word qisma, it is also used in Persian, Hindi, Urdu and English. During the 15th Istanbul Biennial in 2017 Fred Wilson – an American artist of African, Amerindian, European and Native American descent – installed an exhibition that shed light on the presence of African communities within the Ottoman Empire in what may be deemed a somewhat brave and controversial display, given that it criticised the Ottoman Empire in the very country that it originated. This exhibition has now been brought to Pace Gallery in London. Afro Kismet comprises a plethora of objects and artworks displayed in a sumptuous gallery in which thick black tears drip down the walls and luxurious chandeliers hang from the ceiling. At first, one would be forgiven for thinking that the curatorial thread may be a light one: a standard historical display; instead, it has been sewn together with a rough and heavy chord to expose a dark and sinister past.

Across the exhibition various pieces of text have been printed on the walls, the first of which reads: ‘I…am from Africa.’ From the outset, it is clear that the display will focus on Africans in some way, many of whom found themselves living as slaves within the Ottoman Empire, which spanned the 14th and 20th centuries. It was during the 16th and 17th century however, that the Ottomans had the greatest access to African slaves as they took control over Egypt, the Fezzan region and most of the Arabian Peninsula. Slavery continued until it was banned in 1847 and the slave market in Istanbul closed. Amongst the work on display – most of which was collected from storage found at the Pera Museum in Istanbul – are a number of classical paintings of black figures. Printed on the wall above a painting in which an African man wearing a fez is tending to a horse are the words: ‘Love is a country he knew nothing about’, stressing the fact that the subject in the painting was embraced with the very opposite of love by the country he would call home. Similarly, ‘Arap değil’ – meaning ‘not Arab’ in Turkish – is printed below a painting of a black man playing a wind instrument. By incorporating new wall text, Wilson questions the traditional display of art within museums and quite literally re-contextualises and re-writes history. 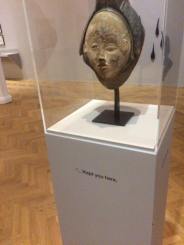 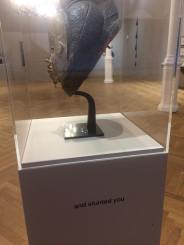 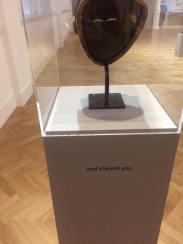 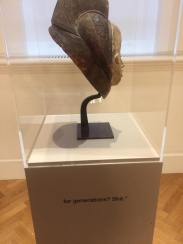 In addition to painting are a number of African sculptures. Behind one of them, text that has been formatted as a poem reads: ‘O being taken by the insolent foe/And sold to slavery, of my redemption thence/And importance in my traveller’s history.’ Below other sculpture that has been trapped within glass cases, small portraits of black figures have been pasted on the bottom of the plinths so you might hardly notice them. Around one of them emotive language has been scrawled on all four sides of the case: ‘…Kept you here,/and stunted you/and starved you,/for generations? Shit.’ It is this change in writing style, as well as language, that keeps shocking the viewer continuously throughout the exhibition.

There are also a number of cases within the exhibition that display historical prints of Turkey and Asia Minor that one would find in history books. The glass cabinets they are contained in have been blurred. The images are unreadable apart from select portions of the prints where the glass has been cleared to highlight the presence of a black figure within the frame. These black and white papers sit below a room in which the very tops of the walls display African flags that have been hung so high that they almost touch the ceiling. You could easily miss them if you did not look up, but when you do, you will notice that the colour has been sucked out of the emblems. This almost seems to signify, that by taking the people out of their homelands, the vitality has also been removed. The sombre presence of these black and white flags with their lack of colour also seems to signal pain.

In the midst of paintings, sculptures and historical documents, the centrepieces of the exhibition are two tiled walls that face each other in the middle of the gallery. The structures have been covered in traditional black iznik tiles that have been painted with beautiful blue Arabic calligraphy that translates into English as black is beautiful and mother Africa. The meaning behind the stunning works is concealed to all who cannot read Arabic, almost another stress to signal that only a select few know about this history. Its message reflects the importance in acknowledging the presence of Africans within the Ottoman Empire and also mirrors the slogans repeated in civil rights marches in contemporary America. At one point, the wall reads: ‘Nothing ever goes away’, reminding us that the issues faced by Ottoman Africans, still affect many people from a number of circumstances across the globe.

Fred Wilson’s exhibition, while sad on the surface, is a positive one. It shines a light on an area of history that was once plunged in darkness. By allowing the exhibition to travel – from Istanbul to London, and soon after to New York – Wilson has already succeeded in passing on this seldom discussed information about the past to a large and international audience. It seems that the kismet of the Ottoman Africans is ready to be revealed.

One thought on “Fred Wilson @ Pace”