As soon as the slightest ray of sunshine fights its way through the London clouds flowers are everywhere. Whether it be physical blooms during the Chelsea Flower Show, adorning our homes or printed all over the fashions dresses that mark the beginning of a new season, blossoms of every variety are synonymous with warmer weather. The floral motif has been popular in the visual arts for centuries, ensuring that the delicate posy has remained an ever-present subject of representation year in, year out. A new exhibition of Flowers at Ordovas explores the different guises of the humble flower in a modern context.

Sitting quietly behind the shiny glass windows of Ordovas on Savile Rowe are dozens and dozens of flowers. Each bouquet consists of an arrangement of powdered blues, pinks and purples, drawing the viewer in to a larger show of blossoms inside. Like the petals in the gallery window, the artwork – all of which depicts the flower – is all on a relatively small scale, not too dissimilar to their real life floral counterparts. While flowers can signify many things that include love, loss and sympathy, the overall atmosphere provided by these predominantly two-dimensional artistic representations of plants is one of fragility. The exhibition’s colour palette is muted; there are no sunflowers or red roses here. Rather, the overall aura is pale pink, mixed with a drop of grey.

Many of the works on display at Ordovas could be compared to a northern renaissance still life painting. Traditionally, this genre incorporated florals to signify mortality through the inclusion of dried up petals, reminding the viewer that beauty fades and nothing is everlasting. Yet the painted flowers at Ordovas look far from dead. Gerhard Richter’s Blumen, 1992 – on display in London for the first time – illustrates a soft, slightly out of focus crop of a soft blush bouquet, complete with lush green leaves. Similarly, Lucian Freud’s Cylcamen, 1964 also shows a bunch of pale-coloured flowers amid dark green foliage. However, the image is not as ‘pretty’ as one might expect, being painted against a discoloured wall in the artist’s flat. 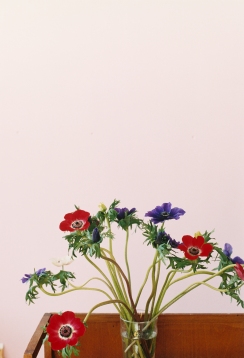 Hanging from the ceiling, Alexander Calder’s Little Black Flower, 1944 is the only sculpture within the show. The wire branches dangle gently from the ceiling, each carrying a handful of red triangular leaves. At the end of the longest metallic wire is a single black flower, which carries three spiky petals. The dark bloom is the smallest element of the structure, transforming a colour that is usually associated with darkness into a delicate piece of nature. The stems in Wolfgang Tillmans’s Anemone, 2003, are as spindly and captivating as the branches that encompass Calder’s Little Black Flower. Tillmans’s selection of red and purple posies is planted together in what looks like a drinking glass. Mirroring the domestic scene of Freud’s painting, the flowers look like they may even have been positioned on a wooden chair and, like Richter’s Blumen, the scene has been cropped so that we cannot tell the exact positioning of the plants. 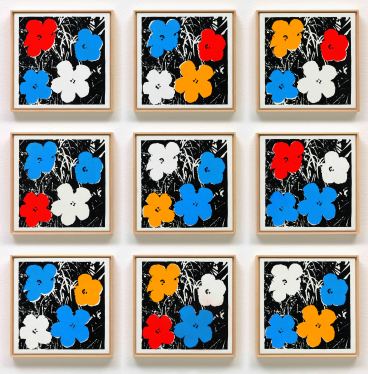 Flowers move from representational to a graphic depiction thanks to the inclusion of Andy Warhol’s 1964 series Flowers, which are displayed beside a primary-coloured 21st-century interpretation by Richard Pettibone. Warhol’s move away from celebrity culture and towards the world of flora and fauna is appropriated here by Pettibone. This is ironic, as Warhol also took his flowers from an image made by another artist (not exhibited at Ordovas): Patricia Caulfield. 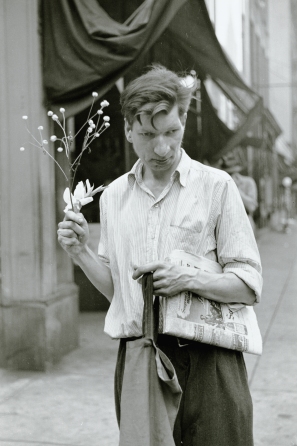 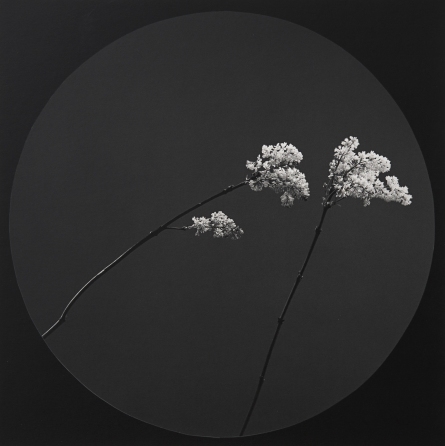 Florals become photographic through the inclusion of works from Louis Faurer, Weegee, David Dawson and Robert Mapplethorpe. At Ordovas, the romantic undertone most often associated with flowers is exhibited in three black and white works. Eddie, New York, NY, 1948, 1948 by Louis Faurer and Weegee’s Limelight are the only images that include human life. Faurer’s subject Eddie is shown on the streets of New York alone with a gangly bouquet of tiny blooms. It is not clear who gave them to him, or whether he bought them for someone else, but the image carries a light air of amorousness. Conversely, Weegee’s Limelight pictures a vase of flowers on the table, in front of which a man turns his back to leave the room, leaving the viewer to ask where he is going and where the arrangement came from. Mapplethorpes’s Flower, 1984 shows too long thin branches enclosed within a black circular frame. Each plant has a delicate head of white petals, with one branch lunging towards the other. While the relationship between the two plants is ambiguous, the spindly nature of them echoes the stems and branches in Calder’s and Tilmans’s work.

Ordovas’s presentation of flowers is delicate and gentle, much like the flowers that spring their heads in the warmer months. There is a sense of fragility that is a constant throughout the exhibition. The display is not ground-breaking or particularly striking, however, like the floral trends that recur year after year, that is not a problem. Flowers provides a mild, soothing welcome to the new season in its simple celebration of the beauty of flowers.

One thought on “Flowers @ Ordovas”