In this episode of the Gallery Girl podcast we are joined by Sarah Hamed, Malak Khalil, Mana Merikhy and Laila Staubmann, who are all members of Young Shubbak, an initiative by London’s Shubbak Festival, a Middle East focused biennial . Through the festival and its engagement programme, Shubbak champions the diversity of Arab artists’. Gallery Girl spoke to the Young Shubbak team about how the group came together, their recent projects and what they’re up to in quarantine. 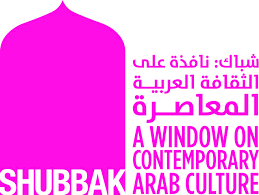 Young Shubbak first came together in October 2019 as a group of twenty 18-25 years olds from a range of backgrounds passionate about art and culture from the MENA region. “Shubbak wanted to make the festival current. And how could you make it current and relevant if you don’t have young people involved in the programming?” says Mana, “Personally I wanted to find a group of like-minded individuals in a space where we could have these discussions and to make the art-world more inclusive to promote Middle Eastern and Arab art.” The others agree. “It’s been so interesting having some many different voices from so many different backgrounds from so many different experiences”, adds Sarah, “It’s also so special to be part of something that’s so big but where each of us has the space to find our own voice.”

The group’s first event was a night of spoken word and live drawing at the Lyric Theatre in Hammersmith, London called Other Love on Valentine’s Day 2020. The event was sold out, and the Young Shubbak members were helped along the way to produce every aspect. “Within young shubbak one of the most important things from a learning perspective is that we have a lot of professional development seminars from members of the industry”, explains Sara. The group meets once a month, with their second planned event called Thawra She Said. Scheduled to be a night where female and non-binary artists with roots in the region could come together to talk about their experience of revolution, the event has unfortunately postponed due to the coronavirus pandemic.

Despite the effects of Covid-19 however, Young Shubbak have kept producing art and culture. They recently put a new project Bayti Baytek – meaning my home is your home – online. The project brought three artists scheduled in past Shubbak festivals together with three younger artists to collaborate on making an artwork through digital communication. Put together by a selection committee, the artists were prompted to make work by different spaces of the home, producing works over a five day period.  “We’re physically quite grounded right now”, says Sarah, “We wanted to have a project that calls for artists to relate to their physical surroundings in this time and have works that speak to it. We wanted this to also be a time of collaboration and a way for artists to come together and create connections.” The project invited artists to engage with physical spaces in a digital way, with the resulting collaborations Studies On a Comfort Pillow (Joe Namy and Nour Annan), A Space In Time (Reem Karssli and Doha Aboelezz) and Ball Of Kitchen Games And Showers (Nada Elkalaawy and Enkidu Khaled) having been inspired by the bedroom, the kitchen and the living room.

While in quarantine, Sarah, Mana, Malak and Laila have been working on their own quarantine projects too. “We’ve all been busy in immersing ourselves in this new artistic landscape that’s been moving online”, explains Malak, who is running an Arabic literature in translation book club on Zoom with Cafe Palestina, “We’re thinking about different ways we can move out of and transition away from this part of time.” Mana meanwhile, has been printing. Prior to the lockdown she focused on illustration and line drawing, but has taken the opportunity to take up printing, selling her prints and sending the profits to the National Health Service. Laila has been fundraising too, trying to help the health crisis in Yemen, and she’s also been trying to learn to paint using Bob Ross videos. While Sarah is hoping to start a comics lab. “It’s specifically a platform for minority voices to speak about their experiences on their terms”, she explains, “Personally I find it really important to move conversations away from trauma, suffering and vulnerabilities because we’re all so much more than that. I really love comics and the way they are accessible. There’s a couple of amazing comic artists in the region and I’d love to platform them more.” In addition, Sarah contributed to a list of resources on racism in the Arab region by Kerning Cultures. “Working to educate myself on anti-blackness in the Arab world as well as honing in on my knowledge of Britain’s colonial history has been incredibly important to me”, says Sarah, “It is something we each have been working on too.”

And what about the future of Young Shubbak? Next year, Young Shubbak will be helping to curate the July 2021 edition of Shubbak Festival. “We’ve been given such an incredible platform to curate and produce and market our own events”, says Mana, “It’s really really challenging as a junior creative in this industry to have such an opportunity.” “It’s beyond the opportunities to put these things into action”, adds Sarah, “It’s to come up with the concepts themselves and be involved in the entire process and create things that we’re really passionate about.”

On this episode of the Gallery Girl podcast my guest is Alymamah Rashed, a Kuwaiti visual artist who investigates the discourse of her own body as a Muslima Cyborg, fluctuating between the east and the west. The Muslima Cyborg rests in a liminal spectacle that compartmentalizes the collective tangibility of the mind, the body, and the ornament.