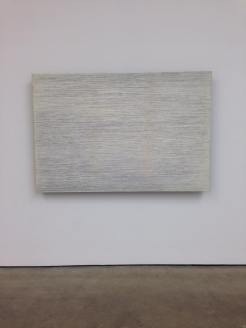 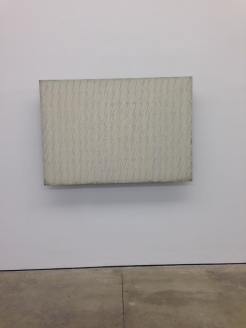 I went to see the current Park Seo-Bo exhibition at White Cube when I was feeling tired and lazy. It was an early Saturday morning and I was hoping that Seo-Bo’s images would provide me with the boost I needed for the day. Unfortunately, they had the opposite effect.

Before his White Cube show, I knew next to nothing about Seo-Bo. It was the press images of his neutral backgrounds topped with layers of scribbles that made me want to see his work in person. There was a slight Twombly-esque feeling to the work that drew me into the gallery. The work on display from the artist’s Ecriture series is visually intriguing. All of the sixteen images on show are comprised of grey scribbles over a neutral backdrop. They have an arresting effect over the viewer, however it is not an intense pull that commands the audience, but a soft, hypnotic one. It was a lazy, languid and gentle repetitiveness to the work that left me spellbound, and if I’m honest, a little bit tired.

Perhaps my feelings of fatigue and nothingness towards the work is not a bad thing. After reading up about the artist it appears that his aim within his work is ‘to create a pure emptiness’, and while his paint and pencil images are clearly not empty, at least one of his viewers felt that way about themselves after communicating with the work. That said, Ecriture, which is the title of the exhibition, is also the word for ‘writing’ in French. If we take this one step further and attempt to read the work as a text, then one could surmise that it is indeed empty of readable meaning in any recognisable language.

Seo-Bo is hailed as the father of the Korean ‘Dansaeskhwa’ movement, characterised for its calligraphic marks and influenced by Buddhist and Taoist philosophy. Moreover, regarded as one of the most important figures in Korean modern art, this is the artist’s first solo exhibition in the UK, and that in itself is a great reason not to miss Seo-Bo’s London debut at White Cube.