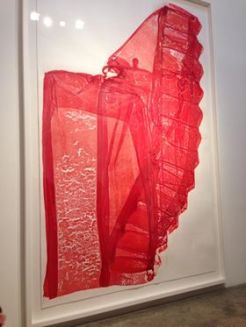 How does one define home? Is it a place? Is it a feeling? If it is a physical space, what in its very physicality elevates it from a building to a location filled with sentiment? Can a place of residence evolve into a home immediately or does a dwelling become a realm of feeling over time. Do Ho Suh’s artwork concerns itself around material accommodation on a small, intimate scale; a location that houses a family or single person. The artist fabricates buildings that are lived in, where we might go to sleep at night or eat breakfast in the morning, rather establishments created to serve the masses. His new exhibition at Victoria Miro is now exploring just how we construct our ideas of home.

Do Ho Suh grew up in South Korea, studied in New York, worked in Berlin and settled in London. For an artist who has lived in lodgings on three different continents, ‘home’ may have many different meanings and definitions that have changed over time. Throughout his Victoria Miro exhibition, the artist presents us with ‘home’ in the material sense, not its insides but its external shell. The focal point of the exhibition is Passage, a three-dimensional installation in which viewers take a journey through various fabric structures constructed out of translucent fabric. The different compartments of the work represent different buildings or ‘hubs.’ They are extremely thin and fragile, differentiating themselves from one another in a change of colour. Perhaps this is an attempt to carry former homes with him on his journey, wherever he is going. The very nature of the fabric means that unlike a house that has been made with bricks and cement, these textile buildings would not be difficult to transport in the conventional sense. However, it is this material format of the artist’s domestic structures that would mean it is probably just as problematic to move as your standard semi-detached family abode.

Passage is an arresting display of subtle colour: pink, blue, green, yellow. Despite using a wide palette, the ‘home’ is subdued. It looks as though Ho Suh has dyed the building’s shell himself, allowing a washed-out effect. It is highly detailed with the inclusion of door knows and windows sewn on in fine black thread. A fire escape is even included should we need to break glass to exit. Ho Suh’s beautiful construction may breathe a sigh of relief; no glass will be broken just yet, as he hasn’t included any.

A number of works on paper have been created to accompany Passage, which are also made using fabric. Once constructed however, they are demolished. Yet unlike the rubble from a demolition site, these have been compressed and preserved behind glass like pressed flowers. These images are visually arresting and in one sense more powerful than the three-dimensional work they were drawn from. While Passage provides the viewer with an immersive experience, its deflated counterparts present a ‘home’ with the life sucked out of it. Perhaps this is what it is like to leave a home, knowing that you will never be able to get back to it. You can see a photograph, but you can’t touch. Maybe you have memories of what is inside but for some reason it has changed. Ho Suh’s ‘home’ has become suddenly inaccessible by framing it behind glass. It’s almost as if it has moved out from the light and airy Passage and relocated into a vacuum. Like an artefact in a museum, you can look, but you can’t touch.

Upstairs are more artworks trapped behind glass. The Specimen Series on the second floor frames light boxes which encase house fittings made out of doorknobs and light bulbs, the little things that make a home suitable for living in. On an opposite wall are parts of the home’s interior that look as though they have been x-rayed. Such objects as the bathroom toilet are shown glowing against a black background. It seems that Ho Suh has moved on from presenting us with the skeletons of buildings to the x-rays of what lies inside them.

I first felt a strong yearning for ‘home’ after leaving the family nest to study at university. Albeit only one hour or so away on the motorway, my temporary student accommodation could never compare to the safety, security and familiarity associated with the suburban house I grew up in. In a video that covers three walls, and three angles, the Ho Suh presents us with an exploration of London and Seoul on a walk with his daughters. The film moves from city to city, exploring their surroundings with the help of a Gore video camera. The film, while not as visually exciting as the rest of his work, provides an interesting ending point for the show, exploring how family contributes to a home as well as its surrounding area.

While the shells of Do Ho Suh’s fabric buildings are an undeniably beautiful fusion of fine art and architecture, it is the concept behind his work that leaves the biggest impression. Just what is it that makes certain buildings, essentially piles of cement, so important to us, so that even after we leave there memory cannot be forgotten? Moreover, how can we preserve these places of shelter once we have moved out of residence?

Do Ho Suh: Passage/s is on display at Victoria Miro until 18 March