An Iraqi and a Norwegian walk into an art gallery. They start up a conversation in two languages. One speaks in fabric, the other in marble. What are they trying to communicate? On first impressions, the dialogue does not seem to make sense, but if we look deeper into Kristin Hjellegjerde’s Disclosing the Uncanny, we can see that both artists share a concern with exploring the fragile and visceral presence of the human body.

Kristin Hjellegjerde’s gallery walls have been covered in layers upon layers of draped fabrics. Luxurious folds of velvet and silk fall unctuously in fleshy tones of pink and peach, while smaller marble figurative forms are dispersed around the space on plinths. Norwegian artist, Hanne Friis’s fabric works look like meat and muscle from one angle and like coral from another. There is something vaguely corporeal about her artwork that shares a resonance with Rome-born Iraqi artist, Athar’s disfigured bodies. Both artists exhibit sculptural works that are simultaneously perfect and grotesque. In Athar’s Child’s Head Opus 5 NR.9, 2015, a bust of an infant’s face has been distorted, so that an eye is missing and the nose and mouth have been swirled around to create a deformed visage. Similarly, Friis’s New Ornaments II, 2017, hangs from the ceiling in a bloody mound of bunched up velvet that strongly resembles a rotting meat carcass that one might find in an unsanitary butcher’s shop. 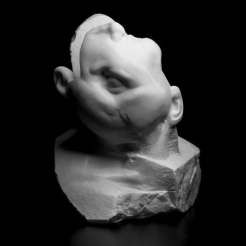 The definition of the word uncanny is of the ‘strange or mysterious, especially in an unsettling way.’ There is something both beautiful and disturbing in the works of Athar and Friis. Whilst the sumptuous textiles used by Friis appear rich and opulent, they also resemble rotting skin. Similarly, Athar’s marble sculptures have been manipulated so that the fragile human exterior has become deformed and grotesque. Friis has stated that she is ‘interested in the body’s vulnerability and human mortality…but also the power and violence of life.’ This sentiment is echoed by Athar, whose themes of violence and suffering have become manifest in his art after witnessing his cultural heritage become engulfed by the Gulf War during his childhood, subsequently leaving the artist to grow up across western Europe. This fragility of the human body has been displayed in the tightly bunched folds of Friis’s textiles and the amputated figures of Athar.

Athar’s marble sculptures are cold and lifeless and one gets the sense that these skinless figures could be clothed by Friis’s fabric works. Friis’s textiles evoke a sense of violence in their compact compositions that in parts seem to be strained closely together, where in others, material has been allowed to drip from the walls. These compositions of silk, velvet and wool have been hand dyed with organic, natural pigments sourced from bark, lichens, mushrooms and pinecones foraged from the Norwegian landscape. The works were sewn by hand with needle and thread, which seems uncanny in itself, as the forms appear extremely dense and heavy.

Where Friis’s fabric resembles flesh, Athar’s marble is bone. His skeletons however, don’t resemble those you would expect to see in a science textbook. The limbs have been distorted through acid erosion, carving, sandblasting and shooting to reveal internal suffering. Athar explains that a perfect body ‘is an unsuitable reflection of a person’s physical and psychological fragility.’ Therefore, works like Shot Head Opus 5 NR.8, 2015, visually reveal tormented, mental agonies, that are often hidden behind composed exteriors. The natural ethos evident in Friis’s naturally coloured textiles are mirrored in the accelerated decay of Athar’s sculpture, which reflect the process of rain erosion on antique sculpture, that has taken place over millennia.

Athar and Friis have manipulated the external casing of the body to reveal the internal struggles lurking behind the human shell. Through the dishevelled fabric skin of Friis and the tormented marble busts of Athar, the audience is forced to contemplate the possibility of beauty in the face of decay. At the back of the gallery, a video is projected onto a blank white wall. The film looks like it is set in space. It is pitch black, with white matter floating against the darkness. The video entitled Shoot II, 2015, is actually a series of 64 short videos of one of Athar’s sculptures being shot. It seems a fitting conclusion to an exhibition that has been titled perfectly, the works on show certainly do disclose the uncanny.