Gallery Girl: Can you tell me a little bit about the differences between studying fine arts in Lahore compared to New York City, was it easy to adjust?

Hiba Schahbaz: I trained as a miniaturist when I was an undergraduate student at the National College of Arts in Lahore. It was a very intense four years of study, where my focus was on technical proficiency and studio practice. I later moved to NY for grad school. I felt the two experiences were very different. In Pakistan there is a stronger focus on developing technical skills, whereas in the US the focus is more on concept and theory and knowing how to present yourself and your work. Plus, outside of miniature painting I had very little knowledge of art history when I arrived in NY which has been improved by a mix of schooling, great museums, and a lot of reading.

GG: Is there a difference in reaction to your work from a Pakistani audience compared to an American one? And the same between men and women?

HS: I haven’t shown my work in Pakistan since I moved to New York in 2010. I made my work very public four or five years ago. Working in NY which is multi-cultural and full of creative people has been very liberating. It’s been an enriching experience to have a dialogue around my work. It’s facilitated my growth as an artist.

I paint women and I feel women are more drawn to my work and able to find themselves in my paintings. Specifically brown women, whose bodies are underrepresented in art. A lot of women, not necessarily women in the arts, visit my studio to see and sit with my paintings as part of their own personal journeys.

Self Portrait as Grande Odalisque (after Ingres) 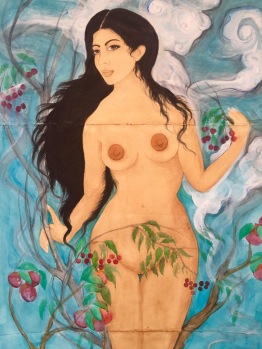 GG: You have modernised traditional Indo-Persian miniature painting, adapting a male-oriented method of story-telling to be told through a female voice – would you describe yourself as a feminist? What reaction do you get from male artists who still follow painting according to these traditions?

HS: I am an artist and a feminist. I believe all people and cultures are equal. I don’t have much contact with men who are miniaturists, although I would like to think they support my practice.

GG: Miniature paintings were traditionally kept in albums, for private entertainment – have you ever considered producing an album of work?

HS: I love books. My mother was a school librarian and ran a free public library when I was in school. Miniature is a form of book art. It was used to illustrate poetry, historical manuscripts, and literature. This is probably one of the aspects of miniature painting which initially drew me in. I would love to make to books, though I am not as interested in illustrating a story or history. But I would love to compile a book of paintings or make an art book. 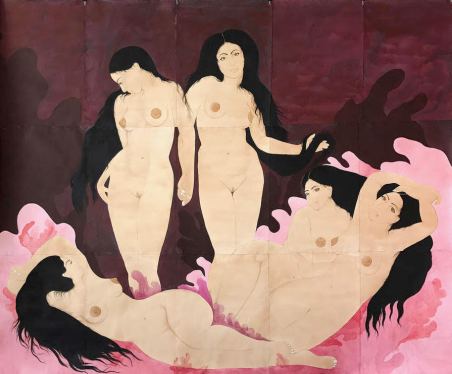 GG: Miniatures are usually, like their name would suggest, small. Many of your works appear to be huge – why is it important to you to Enlarge them?

HS: My recent paintings are very large. I expanded the scale of my work a couple of years ago after exclusively painting miniatures for about 15 years. I love miniature paintings and my vocabulary is deeply rooted in it, except now my paintings are larger than life. I’m enjoying the process of working larger, because it feels like I’m learning to paint again which is very exciting. I also feel more connected to the larger works. I find the process of painting them to be more physically and psychologically engaging.

GG: You have a series of paintings made using tea, what is your favourite medium to paint with?

HS: I like most transparent mediums, such as watercolour and tea. I have painted consistently with tea over the years. Earlier, I made small paintings almost entirely with tea. Now I paint large works in which the bodies of the women I paint are rendered in tea. It’s definitely one of my favorite mediums to work in.