The title given to Flora Alexandra Ogilvy and India Whalley’s co-curated exhibition at The Dot Project would suggest for a downcast room full of wintery landscapes populated by pining figures. In reality, the gallery in Fulham has become home to a series of abstract paintings made by artists that the duo found on social media.

Given that Ogilvy is the founder of digital arts platform Arteviste, it should be no surprise that the young artists on display in the exhibition all made their name thanks to digital platforms. That said, together with The Dot Project’s founder, India Whalley, the curators have affectionately brought the artworks out from behind the cold screens of the smart-phones that all millennials have become addicted to, and into the warm atmosphere of the gallery.

While this exhibition is taking place during the winter, Love in a Cold Climate takes its name from a novel by Nancy Mitford about a British aristocratic family in the 1940s. However, there are no posh lords and ladies on display at The Dot Project. The exhibition does though seek to explore the tensions between surface and space, much like the complicated layers of social hierarchy that continue to exist in society still in 2017. 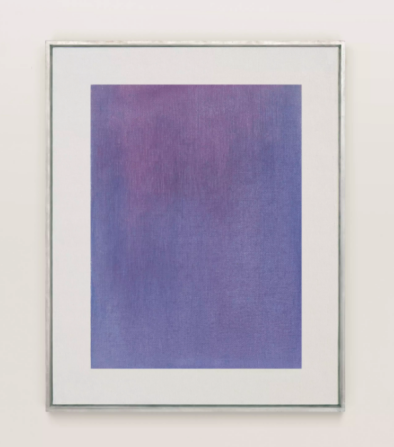 Romana Londi, The secret Lives of People in Love n. 12 , 2017, Mixed media on canvas board 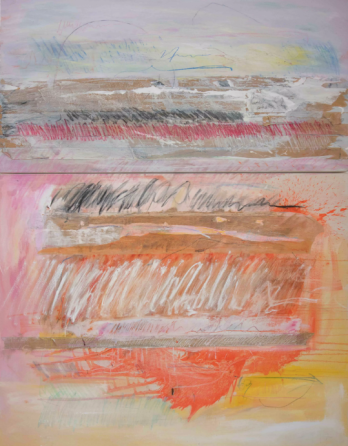 Perhaps the most obviously frosty works on display are Romana Londi’s three small purple-grey canvases called The secret Lives of People in Love, mixed media on canvas board (2017). The works seem to shine like fog against a cold window and alter depending on the light to which they are exposed. Maybe the love interest is trapped behind a pane of glass, or it is intentional that no hint of a character can be seen because the work is intended exactly to reflect its title, and to remain under wraps.

Opposite Londi’s trio of secrets are two untitled works from fashion-model turned artist Sang Woo Kim. (Untitled uneven diptych) crying to shout, mixed media on canvas (2017), is a vertical panel covered in gentle layers of horizontal pastel stripes, upon which agitated scribbles of white and grey have invaded their calm background. The mix between the quiet backdrop and the scrawled marks on top may appear to echo Kim’s dual identity of model-painter, and the difficulty of balancing what some may perceive to be a dual-identity. 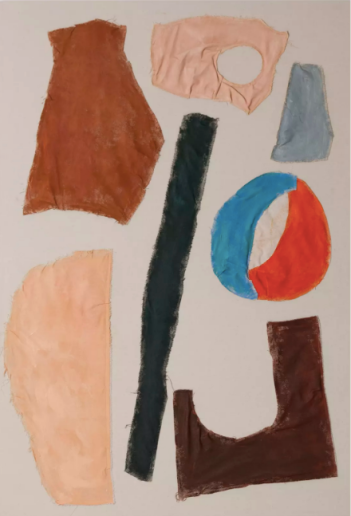 Even more texture is provided in Scarlett Bowman’s collaged works. Her canvases are pasted with acrylic and oil painted shapes that are composed of the outlines of everyday objects. Beach ball, signpost, marble, wood, acrylic and oil on canvas (2017), may be read to illustrate the components of a romantic excursion, yet the neutral colour palette and simplistic pared down components of the collage might suggest the souvenirs of a day lacking in excitement. In contrast, Jack Penny’s works have been delivered like postcards sent from an exotic location. Tropical Dancing, oil on canvas (2017) depicts half naked bodies in a bright, colourful setting. The angular figures and geometric shapes within Penny’s paintings, most notably Lounging on the Edge of Abstraction, oil on canvas (2017), seem to mirror what has been termed ‘primitivism’ displayed in Pablo Picasso’s history-changing painting Les Demoiselles d’Avignon, oil on canvas (1907), which Penny seems to have reinterpreted with twenty-first century eyes.

Downstairs, Maximillian Magnus’s graffiti-esque works share a space with the cosmic paintings of Milla Eastwood. Magnus presents the viewer with two ‘dances.’ Each dance is different, DANCE IT, acrylic on canvas (2017), is a neon pink explosion sharing a canvas with elements of blue. Across the canvas, two parts appear to become one, as a pair of opposing colours allow themselves to blend together. In Dance Green NO 1, acrylic on canvas (2017) however; the duo has separated, leaving a somewhat duller shade of sea green to occupy its canvas dance floor alone. Hung among Magnus’s paintings, Eastwood’s work is more subdued. Both Kami and Kwel, oil, oil on stick and chalk pen on canvas (2017), display navy-blue circles and triangles amongst gold and beige. The canvases appear as though they may be trying to communicate something in a strange, unique symbolic language. Kwel consists of a circular blue and cream form floating against a dark background and appears like the moon. Whereas the triangular Kami stands in front of a semicircular object that looks like a blue sun setting far into the horizon in the distance. Whether intentional or not, Eastwood’s paintings imbibe astral connotations. Many of us consult astrology when it comes to our romantic relationships, so it seems natural that these dark, cool works are incorporated into an exhibition titled Love in a Cold Climate.

Ogilvy and Whalley have presented an exhibition that brings a traditional art form – painting – to a technological audience. Each of the artists have charged their works from a different power source, creating a rich, yet subdued atmosphere in which to generate a narrative between the paintings, allowing the works to discuss their individual experiences of Love in a Cold Climate.