For the most part, it seems as though spring has evaded London this year. Winter has dragged on so that a blanket of snow welcomed March in, and we bid farewell to April with rain showers and fog. Yet, despite the clouds and the cold temperature, the capital’s blossoms have bloomed defiantly, littering the grey streets with freckles of pink, providing a glimmer of hope for a softer, more delicate and altogether warmer climate ahead. These blooms are mirrored in Beatriz Milhazes’s Rio Azul at White Cube where the audience is invited inside a Brazilian garden that has been decked out with elements of carnival floats, food wrappers and carefully constructed textiles.

Rio Azul consists of collage, installation, painting, tapestry and sculpture, all of which has been splattered around the crisp white gallery space like a brightly coloured floral kaleidoscope has just exploded. It is apt that Milhazes’s work manifests itself like a lush tropical conservatory. Rio Azul translates from Portuguese into English as Blue River. It is water that supports not just vegetation but life and from the exuberant hues found in every corner of White Cube, it is clear that Milhazes’s artistic references to fauna and flora have been well cared for and are very much alive. In fact, the artist’s first studio was very close to the botanical gardens in Rio de Janeiro. The influences of the vegetation found nearby the artist’s first workplace is most obvious in her sculptural work. Streams of pink flowers hang from ceilings on vertical threads like chandeliers. In hanging works like Marilola, many different materials – which include aluminium, brass, copper, acrylic, enamel, polyester, paper flowers, resin, foiled paper and wood – caress the floors delicately with a sense of understated majesty.

The sheer colour and vibrancy of the floral aspects of Milhazes’s sculptures can be likened to a Takashi Murakami painting in three-dimensional form. Many of them contain plastic objects that are used to decorate floats during carnival processions. ‘I want to have optical movements, disturbing things; such visions that your eyes would be disturbed when you see them’, Milhazes has been quoted as saying. The three-dimensional pieces, while static, certainly look as though they have been frozen in time, and it is not hard to imagine them moving softly in the wind. A flatter image is represented in the artist’s collages, which comprise elements of both Brazilian and European abstraction. Milhazes’s collages layer paint and different varieties of paper with food packaging and shopping bags. Bibi em ondas laranjas e cinzas, collage on paper, 2017, blends painterly floral and geometric shapes with sweet wrappers which include the famed Russian Alenka chocolate, while Hawai em ondas pretas e brancas, collage on paper, 2015-2017, contains the shopping bags of such brands as Zadig & Voltaire, Joseph and Saks Fifth Avenue. It is here that was the artist describes as an attempt to create ‘a dialogue between symbolism and materiality’ is most obvious, with the geometry – which Milhazes has been heavily inspired by Sonia Delaunay – is juxtaposed against the commerciality of retail and food consumption.

While, the sculptures and collages are arguably the most eye-catching and memorable pieces in the show, it is their accompanying paintings that are central to Milhazes’s work. The rich canvases – inspired by both Sonia Delaunay and Matisse’s paper cut outs – served as a starting point from which to construct the rest of the work. Varying in scale, floral motifs and geometric shapes collide under Milhazes’s paintbrush. The result is a psychedelic array of large-scale paintings that have a hallucinogenic, hypnotising effect on the viewer.

Rio Azul’s centrepiece comes in the form of a huge tapestry that takes the same name as the exhibition title. At 282 x 1,585 cm, the wool textile commands the room. Constructed from hand-dyed wool fibres at Pinton Mill in France, the horizontal work was influenced by Brazilian modernist Roberto Burle Marx who is most famous for his work as landscape architect. The same master weavers who had previously worked with Alexander Calder and Sonia Delaunay constructed Milhazes’s tapestry over a two-year period, resulting in a textile that brings the whole exhibition together. 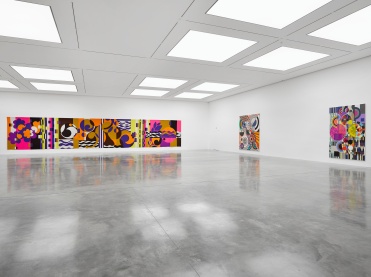 Milhazes’s colourful exhibition pieces together disparate elements that come together to create a spellbinding whole. The exhibition will also become a performance space, through collaboration with the artist’s sister Marcia in a production called GUARDE – ME where dancers will move through the galleries and interact with the artwork – something that the audience has to urge themselves not to do when confronted with the beautiful colours and energy of Milhazes’s oeuvre.