In 1955 Aimé Césaire’s Discourse on Colonialism was published in Paris and Dakar by anticolonial publisher Présence Africaine. In his essay Césaire (1913-2008) – who was born and died in Martinique, but who studied and worked for much of his life in Paris – criticized the European colonial presence in Africa, claiming that the colonizers ‘de-civilised’ the non-Western world by exploiting those whom they were colonizing. On returning to Martinique with his wife Suzanne in the 1940s, the pair founded Tropiques (1941-1945), a journal that offered a vision of a post-colonial future. In After Césaire/Modern Tropiques at Platform in Southwark, curator Aindrea Emelife brings together the work of five Black diasporan artists, drawing on Aimé and Suzanne Césaire’s Marxist and Surreal influences to comment on the Black British diasporan experience in 2018.

Perhaps the most striking work on display at Platform is Phoebe Collings-James’s Ivory Black, 2014. A huge canvas covered in deep black paint that is at once dark and emotional in the way the black has covered its white background, the sheer scale of the image is imposing and powerful, prompting the viewer to ask what darkness has caused the creation of such an artwork. Collings-James’s work has been described as having a focus on ‘how we live with getting bodied.’ Perhaps, considering its title, the piece is asking us to question how different cultures have come together, with one being pushed on to the other in a less than delicate fashion. Besides this work, the artist also exhibits a ceramic piece titled Burn Your Idols #1, 2018. A fraction of the size of Ivory Black, the three-dimensional object comes in the shape of a cross and is painted in various shades of brown that have been allowed to drip down the sculpture’s surface. Its overall burnt appearance signifies that it has been through fire or perhaps some kind of burning ritual. Viewed together with the large-scale painting, one may even equate the black paint in Ivory Black to ashes – the remnants of a violent act. 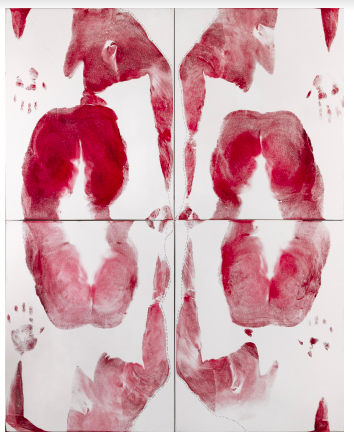 In an almost diagonal position within the gallery space from Collings-James’s work, Adelaide Damoah’s images appear to be much softer. What The Parents Said, 2016, consists of a quadtych that could easily be interpreted as one image that has been flipped four times. On four white canvases Damoah has printed her own body in fleshy pink ink in a way that is strongly reminiscent of Yves Klein’s blue Anthropométries. Along the outlines of her body the artist has written in Ghanaian in small black print. Hung opposite is Damoah’s My Dad Thinks I’m Honest, 2017, in which her own family photographs have been tiled together in shades of red and blue. On top of this she has again printed her own body in red ink and written across the surface before bringing the whole image together through a coat of resin, creating a high-shine glossy effect. This focus on a diasporic heritage and an investigation into a dual identity and history is also reflected in Michaela Yearwood-Dan’s work. In Hot T(r)opic, 2018 and Strange Fruit, 2016, Yearwood-Dan splits her painted canvases in two. One side is populated with lush green vegetation, where the other half is gray-scale in colour and includes the image of a woman’s torso dressed in a crop top and shorts. The two paintings place South London culture within the same frame as her tropical roots.

As the only male artist in the exhibition, Irvin Pascal’s work comments on the complicated history of the Black male. Cream of the Crop, 2018, is a large black and white vertical painted work with a heavy cream-coloured indentation in the centre. Constructed from wood, raffia, crayon, sawdust, hessian and charcoal, it is striking in its outward simplicity, yet the white cavity draws the viewer’s attention as they move across the room. In a vastly different work, Portrait of Usain Bolt, 2018 depicts the athletics star as a star with shoes on. Drawing on the image of perhaps the most famous Black sports star, Pascal reduces Bolt’s personality and figure to a simplistic black star, removing the individual facial characteristics, focusing on one single layer and the colour of his exterior – what he is famous for, and how the world sees Bolt – rather than analysing his personality in detail. 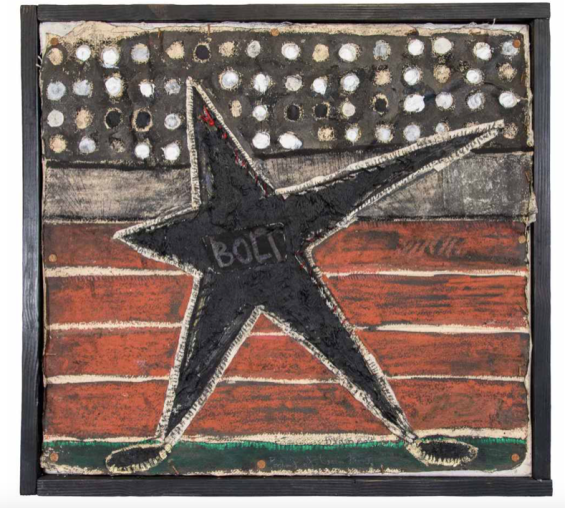 The exhibition is completed in the small-scale abstract paintings of Rachel Jones. Each titled Delayed Lapses in Sight, the square works appear to be abstract, but one can make out the odd detail of a limb and parts of the female figure amongst the small frames. Jones’s work has been described as speaking of resistance and abstraction in reaction to a canon of art history predominantly occupied by white men. Perhaps, in the occasional depiction of fragments of the body amongst an abstract background, Jones is showing the restrained female finally breaking free.

Aimé and Suzanne Césaire masked Tropiques as a journal of West Indian folklore, which allowed it to survive when faced with the threat of censorship and closure once Martinique fell under France’s fascist Vichy regime. While the links to a Black heritage in each of the artists work is present throughout the show, there is a subtlety to the exhibition, allowing each artwork to also function as a manifestation of visual culture. After Césaire/Modern Tropiques succeeds in continuing to question an identity that first suffered under colonialism almost a century ago, and asks what its legacy has meant for contemporary Black British artists.

After Césaire/Modern Tropiques is on display at Platform Southwark, 1 Joan Street, South Bank, London, SE1 8BS until 26th May 2018

One thought on “After Césaire @ Platform Southwark”