I want to tell you the things I have desired, but I am trying to navigate through a reality where desires are constructed for us to grasp on to…

In the aim of challenging toxic masculinity and hetero-normativity, A Strong Desire at PS120 explores body politics and the commodification of relationships and sexual identity under capitalist regimes. Gallery Girl spoke to Aleksandr Blanar, the exhibition’s co-curator, to dissect the show’s inspirations, reception and timing.

Encompassing sculpture, painting and photography, A Strong Desire covers various art forms that strive to reevaluate power structures, slipping through the cracks of established gender constructs to ultimately escape the material body altogether through dreams, fantasy and altered states of mind. The exhibition’s concept was first conceived by the show’s co-curator, Justin Polera, who asked Blanar to come on board. ‘It was important to me to speak about our stereotypes and desires that are sometimes invented for us by society’, explains Blanar, ‘And also to speak about freedom, equality and the opportunity to do what you want to do, to be who you want to be and have a chance to express yourself.’ The resulting exhibition contains artworks that are overtly sexual and expressive. Much of the work is figurative, with a tendency to allude to a homosexual subject, with contributions from such artists as David Hockney and Elmgreen & Dragset. 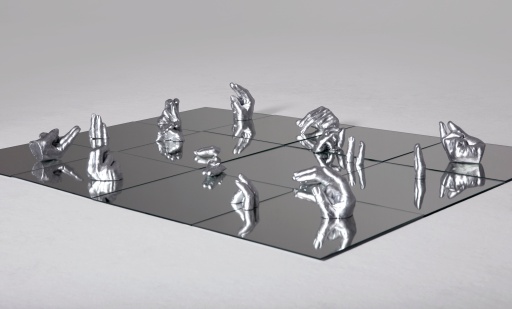 …I have fallen for many of these constructs and bought into them. It has given me pleasure to buy clothes, make-up, healthy vegan food, books – all things that I could use to groom my image into what I want it to be. The idealized version of myself is toned, glowing, busy but able to make time for friends and deep relationships – a real catch

While the concept of Blanar and Polera’s show may not seem immediately obvious, if one takes a moment to think, it is not exactly strange either. Through advertising and social media, much of what we wish for is formed by images that have been carefully selected and marketed for us without even noticing it. ‘We are speaking and researching the stereotypes attributed to us by society or even by ourselves’, says Blanar, ‘Because we live in a capitalist society it is also necessary to acknowledge that our desires can be canned and sold back to us.’ Thus, many of the artworks in the exhibition challenge normalized body imagery and pressures to look a certain way. ‘For example the presence of hyper-masculinized bodies and lifestyles are ever-present in gay culture’, says Blanar, adding, ‘For some, this can be extremely oppressive as this encourages a hatred for anything considered feminine.’ This is seen in work by Tom of Finland (Untitled, pencil on paper, 1984), who illustrates excessively muscular and toned men in sexual interactions. Similarly, Florian Hetz’s photographic prints capture snapshots of the intimate moments within physical relationships.

As well as bodies, the exhibition includes items that cover them, including masks, as seen in the work of Dimitri Shabalin. The mixed-media works are constructed from many objects. ‘It’s the best example that to be in society we need masks’, says Blanar, ‘Under one mask we have another and we don’t know where we are real.’ Shabalin’s works are constructed from old toys, broken watches and other objects that are deemed to be unneeded, but through being recycled into these artworks they are given a new life.

Speaking about the show’s reception, Blanar explained that it was very positive. But when asked about whether such a sexualized exhibition could take place in Blanar’s native Russia, the tone changes. ‘To make the same exhibition with the same text and the same meaning would probably be impossible’, he admits, explaining that perhaps if some of the work was omitted and the theme made more general then it might be feasible. ‘I am sure if you want to do something, its possible’, he adds, ‘Just for Russia we should be legally prepared.’

Where the contemporary art world might market certain artists for us, A Strong Desire excels in showing us little-known names among famous ones, so that our focus is directed towards a range of figures at different stages of their career. ‘At our show we have famous artists like David Hockney, Tom of Finland, Elmgreen and Dragset, Kenneth Anger but also young ones like Daniel Topka, Dimitri Shabalin, Martin Maeller’, says Blanar, ‘They are all on equal footing at the show.’

A Strong Desire shakes up our understanding of the images presented to us by society, leaving the viewer questioning sex, relationships and our value of the body in the 21st century.