Selfies, guns and the Madonna. Armenia-based collage artist Narnur fills her work with images of sensual women surround by war and violence. Growing up in post-soviet Armenia, Narnur’s collages respond to femininity and what it means to be growing up in a selfie, technology-obsessed environment. Gallery Girl spoke to Narnur about her approach to her work, influences and being a young artist in Armenia today.

The majority of Narnur’s work comprises a veiled woman surrounded by weapons or religious imagery. The subject of her collages is always herself, playing her alter ego: Narnur. Born Narine Vardanyan, the name was coined after recognizing a need to separate her personality as Narine from the character that she plays in the artworks she makes. The name Narnur was chosen in collaboration with her friend and curator Ella Kanegarian. ‘This was actually the address of my old email of my student years: narnur89’, she explains, ‘So this way I would start really treating this as work and not “fun” and psychologically divide myself from the represented female characters.’ Narnur describes the character she portrays as a ‘sexually attractive woman, who feels troubled and troubles your mind.’ This is certainly the impression that the viewer gets of the female presented in Narnur’s work. She looks at the camera seductively, her face is heavily made up, yet guns surround her and sometimes she is crying. ‘I call her sullen or sinister’, adds Narnur, ‘For me sexuality is always paired with trouble and the expectation of something dark.’ The work is connected both with mysticism and with the traditional narrative line of theatre, film and literature, where the beautiful, desired woman is often the cause of drama and trauma.

Before coming to collage, Narnur studied art theory at the Academy of Fine Arts in Yerevan, Armenia. After receiving her diploma she worked as an art consultant at Arame Art Gallery, but she knew this was not the career path she would stay on forever. ‘It wasn’t the tool that could give me satisfaction or at least a glimpse of it’, she explains, ‘I had many thoughts and worries, which I needed to shape in some way. So probably this is why and how I came to collage.’ Narnur’s work mixes selfies with other images that relate to her childhood growing up in Armenia that include memories of war, economical crush and tales of soviet dissolution. The work illustrates her fears of losing national identity, globalization, and what she describes as her biggest fear of all: not finding out who she is. ‘This is the main problem of my generation’, says Narnur, ‘We exist in the most relatively safe times and have the opportunity to have it all, but also there is some lack of enthusiasm. We erased boundaries, say no to regular jobs and relationships, but we float.’ It is interesting that Narnur describes her generation as ‘floating.’ In many of her images, the figure of herself is also ‘floating.’ She hovers above altars and guns. Only the top half of her body is portrayed, her legs are concealed, drifting in a strange, mythical world. 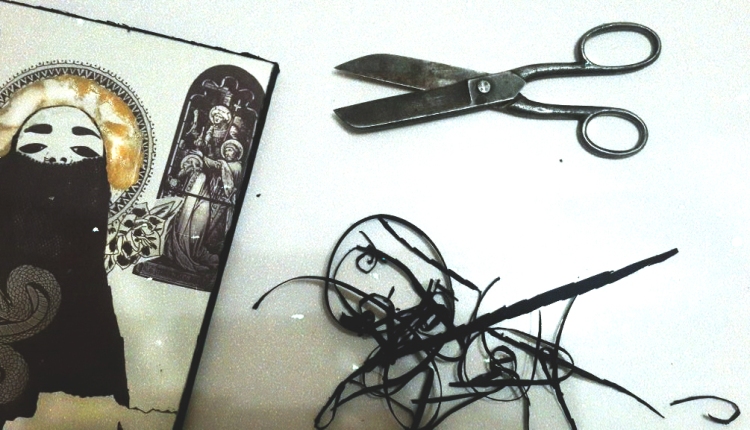 Narnur’s work all began with an obsession of taking selfies. ‘It is so seductive to capture your daily life or your changing moods’, she explains, though she recognises that the smartphone invention of taking self-portraits does not always mirror authenticity, ‘This game of documenting yourself is just a game and you better play it and not treat it as something which may preserve your reality.’ Narnur plays up to the camera, performing a character, one that is both sensual and mysterious at the same time. She began playing with different angles and facial expressions in order to develop her character. ‘I started to play someone else, but whomever I played was a sexy, vamp-ish female, who both excites and threatens, making you afraid of her or desiring her’, she says, explaining that the creation of Narnur led to wider thoughts on being female in general.

The persona Narnur performs in her images often resembles religious icons, nuns and holy women. Sometimes she is surrounded by other characters, as Narnur explains: ‘This can remind of the depictions of holy persons, where the center was always by the saint and the edges were filled by different objects, small details revealing who they are, and something even the weapons which have killed them.’ This may explain the presence of rifles and daggers among the images. ‘Whatever I do, there is always an image of a rifle or a gun in my images’, she explains, ‘Usually I use images of AK 40, which is the symbol of all post-soviet hotspots for me.’ Yet, despite weapons, images of war and the presence of soldiers amongst the work, there is always a woman at the center, the object of adornment but also of desire. Narnur explains that the woman is the main hero: ‘Who helps to balance it all and bears the ultimate burden for everything which happens outside.’

When asking Narnur what it’s like to be a young artist in Armenia, she explains that it is the same as being a young plumber, historian or anyone else. ‘All the resources Armenia shares are equal for all professionals’, she says, ‘It is a country which hasn’t that many resources, but still, even the lack of those resources is a resource too.’ She likens this lack of resources as an opportunity for people to work on themselves, challenge themselves and see how far they can go. ‘There is much potential here in young artists and much potential in young persons in general, sometimes I even think there is more potential here than resources to develop, but it all means one thing – struggle’, she adds, ‘You should try harder and compete with yourself, because you need to develop yourself to open up your layers. You need to become better than yourself and not better, than anyone else.’

Narnur’s work distorts our typical expectation of what a self-portrait should look like. Playing with collage, sensuality and a post-soviet upbringing, the work illustrates a beguiling and multi-layered character and body of work.

At the Duke’s Diwan, the oldest and most beautiful building in downtown Amman 🍭