The press release for Anahita Razmi’s current exhibition at Carbon.12 in Dubai describes an alien landing on Earth, who immediately demands to be taken to the planet’s leader. In Take Me to Your Leader, Razmi asks who leads and who misleads. Playing on her own personal dichotomy — as an Iranian woman who grew up in Germany — the show centres around how Eastern cultures and politics are misunderstood in the West, by taking them apart and mixing them together.

The viewer is welcomed into the gallery space by a series of HD lenticular prints. LEADERS/DEALERS, 2018, changes as the eye moves. Playing on semiotics, notions of representation, misunderstandings and the non-metaphor of a spatial shift of perspective, the words ‘leader’ and ‘dealer’ switch place with one another as the work is viewed from different angles. Using complementary colour schemes across the series of four prints — in red-cyan, green-magenta, blue-yellow and black-white — the letters L and D blend into and out of each other, reminding the viewer that a slight movement of the head might be enough to see things entirely differently. 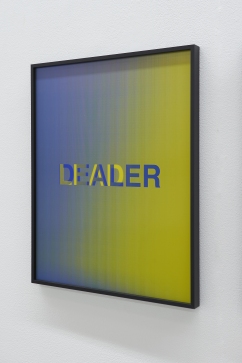 Nearby, two oriental looking garments are exhibited in the middle of the gallery. REIGN COAT #1 and REIGN COAT #2 (2018) reference a sixteenth-century “Persian carpet jinbaori” that is exhibited in the Kodaiji Temple in Tokyo, Japan. In her twenty-first-century take on the “Japanese” vest, Razmi pokes fun at the way the textile was misappropriated 500 years ago. The Persian carpet was never made to have been worn, and would have been imported into Japan via the Silk Road. A jinbaori is a traditional Japanese vest that a samurai would have worn over his armour — in this case to be worn by the reigning samurai Toyotomi Hideyoshi. As in LEADERS/DEALERS, Razmi again plays on the sounds, meanings and spellings of words, creating a garment that would probably not be the most comfortable choice of protection in place of an actual raincoat.

The central work within the exhibition consists of a series of short films, presented in front of tiled wallpaper made up of the front covers of fictional glossy magazines, which have been printed in black and white. The New EastEnders (2018) is a reworking of EastEnders, a British soap opera set in a fictional borough of East London, which has been broadcast by the BBC since 1985. Razmi’s revised version of the long-running soap however, is set in the global east. The central film — THE TRAILER — introduces the viewer to six characters, all of whom are personified by Razmi herself, and all of whom play up to stereotypes that people have about “the East”. The protagonists are: “The Desperate Housewife” (a hijabi woman presented inside her kitchen), “The Ching Chong CEO” (who stands proudly in front of a backdrop of dollar bills), “The Keno Centric Eccentric” (dressed in a kimono next to some cherry blossom trees), “1,001 Night Shifts” (who is dressed up like a belly dancer), “The Influencer” (heavily bearded, wearing a kufiya and with Arabic writing on his baseball cap), and “The Global Glam” (a blonde woman posing proudly in front of a sea of skyscrapers). The proposed series is set in the “Near East, Far East, Middle East and it’s End”, with the films using already existing media strategies and narratives in their arrangements to consider the implications of scripting both fictional and political narratives.

Another kinetic artwork appears in conjunction with the films in New EastEnders – THE SCRIPTS (2018). THE SCRIPTS consist of a red LED Ticker on which the words “and another kismet and another kismet and another kismet” play in a loop. “Kismet” means destiny, referencing the everlasting cliffhangers that appear at the end of every episode of every soap opera, enabling series’ to run for multiple decades. That said, Razmi does not have definite plans for The New EastEnders’s future: “I like to leave that open”, she explains, “But if it happens, it will be on BBC One, replacing the original ‘EastEnders’, and it will run for the next 30 years.” The New EastEnders blends political with pop cultural narratives, two things that are normally separate from one another, yet Razmi cites 2018 as the year in which the two got strangely entangled. “When the US president uses a game of thrones meme to announce sanctions against Iran, or Kanye West is – just two days after Angela Merkel – announcing his distancing from politics, we struggle to see any difference in these headlines.” Instead of playing along with a mainstream media that is defined by clickbait and algorithms, The New EastEnders uses detournement – a French term meaning rerouting or hijacking – as a strategy.

As the viewer is leaving the exhibition they are confronted with PARTIES (2018), which like The New EastEnders, is displayed against a black and white background. Instead of fictional magazines however, the mock publications have been replaced by an enlarged image of the Iranian war. Like much of the work on display in the exhibition, PARTIES plays on the meanings of words. Images of Iranian political parties are projected alongside pictures of snapped fingers, a gesture — called the beshkan, and also known as the Persian snap — that Iranians make with their hands when they dance at parties.

I asked Razmi how the work in Take Me to Your Leader was received by both Eastern and Western viewers, which having first been shown in Austria and Germany, is being shown for the first time now in the Middle East. “Until now the reactions were very varied”, she explains, “The interesting thing is that the format of a soap opera really resonates with people, even ones that don’t necessarily engage with contemporary art.” She also said that she enjoys blurring the lines between high art, politics and popular culture, “up to the point where one might get really confused.”

Razmi doesn’t let the viewer know who the leader is, but her work suggests that the leader is stuck someone between East and West, not sure of who he or she is, having been mixed up by the intense blurring in the media of political and popular culture. Whoever this leader is, they appear to be struggling with their identity, unsure of whether to play up to stereotypes or not. Through wordplay and semiotics, Razmi appears to be helping this leader to re-evaluate who they are.