In February 2018 eight London-based artists were invited to observe and participate in the textile-centred practices of the Kogi and Wayuu indigenous communities in Colombia. The residency – called FiBRA – enabled the artists to witness the ancient skills of working with natural fibres that are considered to be fundamental and indispensable elements of the Kogi and Wayuu social structure. The artworks made by the artists during the residency are now on display at London’s von Goetz. Gallery Girl spoke to Mia Pfeifer – who organised the residency, the subsequent exhibition and an accompanying publication – about sustainability, globalization and tradition.

“FiBRA was created three years ago from a need to understand the material world that surrounds us”, Pfeifer explains, “Living in the city where everything can be purchased, we are disconnected from the production chain and creation of most objects that we inhabit, wear, eat from or use on a daily basis. I wanted to explore, investigate and understand, with the help of a group of creative minds, the environments where some material processes take place.”

The resulting initiative saw Pfeifer take to Colombia with eight artists. Having originally started as a collective research project into textile practices, the focus quickly turned its attention onto the social elements of the experience. “As a curator I was open to their interpretations and the materials they decided to work with”, explains Pfeifer, “Funnily enough four of them decided to incorporate velvet in their pieces.” This is interesting, as the complete body of work looks incredibly natural on first appearance; yet only Bea Bonafini used natural elements – seeds – in her work. 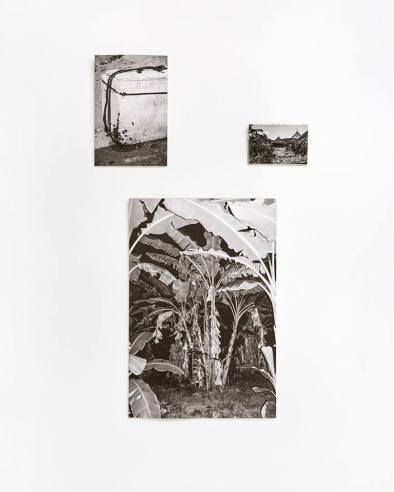 Of the experience, Pfeifer explains that it was a real shock to both her own and the artists’ systems. “I must confess I was a little naïve when I decided to visit the Kogi community as I was looking at their culture from an idealistic perspective”, she explains, “But what we find is that nowadays no one can escape the consequences of globalization, climate change and use of post-industrial materials.” That said, the experience had a profound affect on the participating artists, with all of them now having embarked on different social quests from mostly local perspectives. “For instance, it was hard to experience in the most remote areas – jungle and desert – plastic pollution at a big scale”, she says, “Recycling has now been taken seriously [by the artists] with help towards local projects in their neighborhoods.”

Amongst work on display at von Goetz are Bea Bonafini’s To the Sightless Knot (made from woven seeds) and Dan Coopey’s Untitled (made from matchboxes, bamboo and thread). Also of note is Adeline de Monseignat’s RIP embroidery work, with the words “RIP WHAT YOU SEW” threaded together in peachy-pink tones, not too dissimilar to a make-up palette, the words fading in and out of their coral-coloured backgrounds. Pfeifer’s highlight? “Charlotte Colbert’s ceramics blew my mind!”, she exclaims, “[Particularly] her series of Motherhood ceramics inspired by Poporos – Kogi vessels.”

In addition to the artwork, Pfeifer and the artists produced a publication of essays, which also included photographs and an interview with each of the participating artists, with art direction from Bea Bonafini. Pfeifer describes the publication – also called FiBRA – as “a humble and honest testimony of our time with the Kogi and the Wayuu communities.” The images from this publication are also on display at von Goetz.

During a time when the world seems to be waking up to the damage that humanity is causing to our planet, FiBRA seems like a timely and important project. “It is fundamental and critical that we, as creative minds, take an active lead and embark on projects that can make a positive change in our planet. We only have one!”, says Pfeifer, “FiBRA as a project will slowly but surely get noticed. I am sure about that.”

On this episode of the Gallery Girl podcast my guest is Alymamah Rashed, a Kuwaiti visual artist who investigates the discourse of her own body as a Muslima Cyborg, fluctuating between the east and the west. The Muslima Cyborg rests in a liminal spectacle that compartmentalizes the collective tangibility of the mind, the body, and the ornament.