The tale of the One Thousand and One Nights is synonymous with the Middle East. In the story, King Shahryar marries a string of women, murdering them after just one night after discovering that his first wife was unfaithful to him. When his vizier could no longer find any women, his daughter Scheherazade offers herself as the next bride, who begins to tell the king a tale on the first night of their marriage, but which she does not end. The king, curious about how the story will finish, postpones her execution in order to see how it develops, something which goes on for one thousand and one nights, during which time he falls in love with her. For its inaugural exhibition, Beirut’s Artual Gallery invited seven contemporary American artists to respond to the Middle Eastern folk tales, allowing curator Maria Brito to display an array of work where East truly meets West.

Across a range of vibrant works, sculptures and paintings have been inspired by such stories as Aladdin’s Wonderful Lamp, The Magic Carpet and The Seven Voyages of Sinbad the Sailor. Yet, while Scheherazade’s stories act as inspiration, it is Scheherazade herself who is centre stage. In Scheherazade’s Domain (2019), Rosson Crow (b. 1982) has created a palatial room fit for a queen, bedecked in antique-looking objects, sculptures and lush greenery submerged in a rosy-pink glow. Meanwhile, in Allison Zuckerman’s (b. 1990) larger than life painting Steeplechase (2019), women lure the king with stories at moonlight, keeping him entertained while preserving their lives. 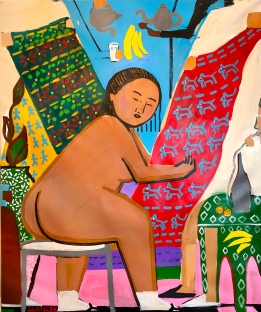 Women are at the fore again in Jamea Richmond Edwards’s (b. 1982) Untitled (From Fly Girl Series) (2019), where a single female figure stands defiantly in the middle of a large canvas, looking strong and empowered. In Monica Kim Garza’s (b. 1988) paintings, several women are painted together in groups. Inspired by female rituals and harems, the images – which consist of both paint and embroidery on canvas – show a sense a unity among the female figures. The images were also inspired by magic carpets, with three women floating together on a pink rug in Thou willeth thou shalleth (2019), and another lone figure embroidering one in Carpet Market (2019). 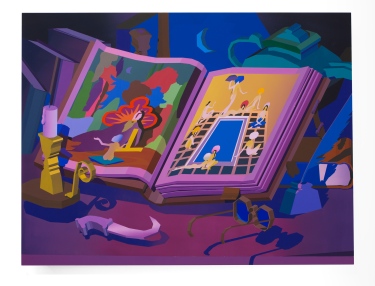 In his work, Jonathan Chapline (b. 1987) creates a room for the viewer to read the stories. His painting The Room (2018) provides the setting, while The Book (2018) is open so that the viewer can read the tales. In front of the paintings, a sculptural lamp and tea set are exhibited on a podium, allowing the reader to imagine that they are drinking a cup of Arabic coffee as they read the stories within Chapline’s painting. “I had these sculptural digital files that I was creating in almost these digital tool boxes and I really wanted to see how it would look physically and that’s when I started creating these sculptural objects” explains Chapline, “My hope is that the viewer can then look from these objects into the painting.”

The exhibition at Artual simultaneously exposes American artists to Middle Eastern culture, while also introducing a Lebanese audience to contemporary American artists. “It’s so hard to understand a culture if we are not exposed to it”, says the gallery’s founder Hind Ahmad, “I think art is a tool to connect everything together.” With hopes for the gallery to continue to grow, and with a stress on initiating true cultural dialogue between the Eastern and Western worlds, Artual seeks to continue collaborating with international galleries to introduce international artists to the MENA region. “Once you create a dialogue it provokes new challenges”, says Ahmad, “It gives you space to reconsider different things or progress.”

The Thousand and One Nights is on display until 3rd May 2019 at Artual Gallery, Eden Garden Building, Ground Floor, Fawzi Al Daouk Street, Downtown Beirut, Lebanon