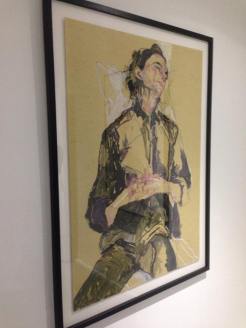 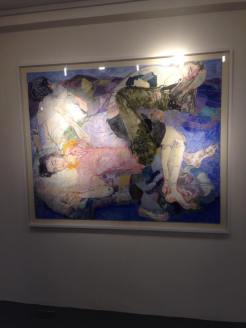 A new gallery has been born in-between Islington and Kings Cross. With a view to create a sense of community in one of London’s ever-growing art hubs, Amar Gallery both exhibits contemporary art and hosts an on-site studio where it will provide residencies for artists from all over the world. Its inaugural exhibition Links has been given to the stunning work of Australian born artist Howard Tangye.

The reception area of Amar Gallery has been covered with a dream-like mural entitled Evergreen. Despite its title, the work is mostly blue in colour, consisting of a number of languid figures lying on top of each other in contorted positions. The eyes are closed and while the twisted posture of Tangye’s characters should suggest that they were anything but comfortable, his subjects look like they are calmly resting in a deep state of tranquility.

Tangye’s exhibition consists of twenty-four figurative works spread across several floors. The work on display – all created over the past two years – comprises a mix of oil, pastel and graphite drawings on paper as well as oil on canvas. His colour palette is mostly a pale and subdued one, while his subjects are defined with dark outlines against neutral backgrounds. If one were to liken compare Tangye’s work to another artist, they may be forgiven for describing his style as a hybrid somewhere between Egon Schiele and Gustav Klimt, although Tangye’s characters give off a much more gentle impression than the harsh gestures of Schiele and the decadent colours of Klimt.

While Tangye’s subjects are often presented in twisted positions,they are not as restricted or as stiff as the sitters in Schiele’s work. Tangye’s portraits are made up of multiple layers. He allows viewers to see the drawing process. We can see where he has changed his mind, giving his figures a sense of movement. This pentimenti – a term that has come from the Italian word ‘to repent’ for a mistake in the creative process – is what makes his work so enticing, providing it with richness and depth. In multiple images this pentimenti allows Tangye to portray different sides to the character of his subjects. In Pamela, the female figure is seen both resting her chin on her hand pensively whilst simultaneously turned upside down with the fabric of her skirt surrounding her in many directions. More intriguing still is Nobu Double where the sitter seems to be dividing himself into two like a conjoined twin.

Tangye studied Fashion and Textiles at Central Saint Martins and went on to become the head of the BA in Womenswear at the world famous school for seventeen years after having completed a postgraduate course in drawing at Parsons School of Art in New York. It seems fitting therefore, that the artist is being exhibited in a location a stones throw away from CSM’s new Granary Square home. Tangye’s background in fashion can be seen in the details of the pleated skirts, silk scarves and basketball shoes worn by his subjects. While his figures may seem inflexible, the garments that they wear have been allowed to drape and fall over their wearers in a natural fashion. It is clear that Tangye understands the human form and how clothes fit to the body, even when the figure has found itself in distorted poses.

Links offers an air of serenity in a contemporary art world that is often a little saturated with intensity and extremes. The exhibition deserves much attention and my eyes simply cannot wait to see what delights Amar Gallery has in store for its future exhibition programme.

Howard Tangye: Links is on display at Amar Gallery until 3rd March