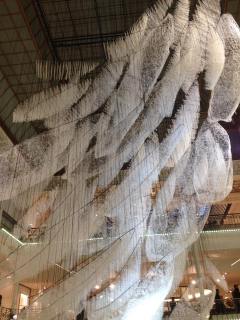 White. Soft, clean and pure. It is the colour of snow. It is fresh and gentle. The colour white is never associated with anything bad. In fact, it is often only linked with goodness. There is something magical about walking through Le Bon Marché in Paris right now. Large white forms have been suspended from the ceiling and appear to cascade through the store like swans feathers.

Le Bon Marché is without a doubt Paris’s most elegant department store. Chiharu Shiota’s installation Where Are We Going only adds to its charm. The snow-white feathers are actually boats travelling through space that have stopped still, as if frozen in a dream. Shiota’s vessels have been constructed out of 300,000 yards of cotton thread, creating a beautiful mesh skin that clothe the body of her boats, which are supported by metallic frames. Below these ships, the shop floor on the ground level has had the central space completely covered in the same frosted netting that drapes Shiota’s boats. In what the artist has called a wave, an immersive winter wonderland allows shoppers to walk through a stunning work of art in a structure with walls enveloped in many hundreds of pieces of white fibres. This tide reminds me of an igloo. It is almost as though it has melted in the warmth of the luxury outlet, explaining the holes that appear in-between the cotton threads.

While Shiota constructed her artwork in 2017, it blends in seamlessly with Le Bon Marché’s central glass roof, which was designed in 1869 by architect Louis-Auguste Boileau. The nineteenth-century ironwork that was installed by Alexandre Laplanche, almost mirrors the skeleton of Shiota’s boats, while the glass ceiling allows the white webbing to glisten in the yellow light of the store.

The docking of Shiota’s artwork in the very centre of Paris’s oldest department store exposes her work to a new audience – one that has not come to look at art. The installation provides an immersive experience that follows the shopper all around the store, following them up and down Le Bon Marché as they travel on the escalators as well as out of the shop, in the windows. Art is almost forced on the unsuspecting consumer, although the work is so delicate that it feels as though it is you who is imposing on its space.

Outside, ten of the store’s ground floor windows have been filled with Shiota’s matted white fabric. Trapped inside her spiders’ webs are maps from all over the world. They seem to answer the question of the installation’s title: where are we going? Shiota doesn’t have the answer. The maps all lead to different destinations. Perhaps she is asking us to stop and think. The boats don’t move. They are motionless. Yet it is this stillness, together with the very fragility of the white yarn that leaves such a powerful impact.

Chiharu Shiota asks us where we are going. While she doesn’t provide an answer, I would suggest any of my readers travelling to Paris in the near future, to go to Le Bon Marché.

Chiharu Shiota: Were Are We Going is on display at Le Bon Marché until 18 February

Time to come out of hibernation 🌱