Ziad Antar’s images of unidentifiable forms appear like abandoned statues in barren locations. His film photographs carry an airy feeling of ambivalence and dominate his Liminal Places and Things exhibition at Almine Rech, which comprises photography and sculpture.

The statuesque structures in Antar’s photographs are wrapped in protective coverings. These covers encase sculptures by Aref al Rayyess, Rabi Al-Akhras and Jean Arp, which are located on the Jeddah Corniche in Saudi Arabia. It doesn’t seem so surprising therefore, that Antar’s images convey an atmosphere of mystery, as it is unknown to the viewer what really lies inside the image, or under the wrappers. Beneath the ghost-like shells of these bewildering figures may be something completely different that what their outer shell displays to Antar’s lens. The statues in Jeddah, which had originally been commissioned in the 1980s, had been covered in tarp and cordage as an act of protection during the city’s urban renovation.

The figures appear like phantoms, on plinths among a deserted abyss. The fact that they have been covered in plain, un-patterned materials makes them appear like corpses in their death shrouds. This sense of expiration mirrors the film, which Antar uses to take his photographs, who first acquired a 1948 Kodak Reflex together with film that had gone out of date in 1976 in 2000.

Through the act of photography, Antar has re-presented the covered sculptures back into an ‘art’ discourse, providing a new layer of artistic conversation even though the forms had been purposely concealed and momentarily shielded from being viewed as art objects. His silvery, cinematic prints have been titled ‘Axiom’, a word that is defined as: ‘a statement or proposition which is regarded as being established, accepted, or self-evidently true.’ This element of truth is questionable. The covered sculptures in Antar’s images have their true core wrapped away from prying eyes and possible damage by their material coverings and thus the construction workers act of concealing the artworks is an involuntary challenge to the authority of modern art. 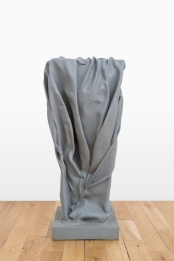 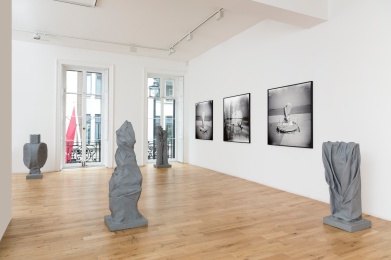 Antar’s liminal subjects not only appear on the gallery walls in silver prints, but also across the gallery floor in three-dimensional reconstructions, composed of fortified concrete and silica. The feeling that the concrete figures evoke is completely different to that of the photographic prints. While the two-dimensional subjects appear like fantastical figures, standing proud, looking over their landscape, their three-dimensional counterparts seem a little ominous and lack a little in presence. Perhaps this is because their matt, concrete shell appears completely flat in comparison to the photographic prints, which are full of depth and shadow. By re-imagining the coverings so that they are actually embedded in the sculptural form, Antar has asserted that these artworks can not only be defined as ‘art’ when they have been unveiled, but also when they have been concealed too.

Behind another wall in the gallery, there are more sculptures and photographs. These however are of a completely different subject: potatoes. While the vegetable may seem a strange theme, Lebanese Antar has held an interest in the plants for a long time, having previously photographed farmers working in the Beqaa Valley. Again here, the subjects that he has photographed are also represented in a three-dimensional form. While the covered statues in the previous photographs are printed in black and white film however, these are in colour. Before turning to art, Antar studied Agricultural Engineering at the American University of Beirut. His documentation of the humble potato was spurred by his desire as an artist to write counter-histories of the world by investigating marginal subjects, which are central to our understanding of the world. He has placed potatoes as his subject in different parts of the world, including the Netherlands and Belgium, to illustrate their journey of agricultural exploitation.

The unlikely depiction of the potato forces the viewer to pay attention to something that is often neglected. That said, it is an image of the potato flower, something that we don’t often see, which completely steals the audience’s attention away from the concrete forms and the other colour photograph. Potato Flower, 2017 is printed against a vibrant red background that allows the pale pink of the plants petals to stand out against its backdrop.

The sculptures on display at Almine Rech are interesting, however, it is his photographs that steal the show. The use of expired film to capture subjects that have expired from public view adds a layer of mystery to his bewitching images.

Ziad Antar: Liminal Places and Things is on display at Almine Rech, Savile Row until 10 May