Paper is not a medium that is highly regarded in the art world; canvas or bronze are met with more esteem and appreciation, while paper is often discarded as ordinary and unexceptional. This is because, more often than not, paper is the cheaper, rough, preparatory version of an artwork that is usually worth more in both material and artistic value. Despite all this however, paper is undeniably more easily accessible and dispersed. The current Living Histories exhibition at the British Museum illustrates how posters, prints, drawings and photographs have been, and continue to be, used as a social commentary on the situation in Syria since the beginning of the 2011 uprisings.

The most powerful works in the exhibition may not have meant to be read as works of art at all. Alshaab alsori aref tarekh (the Syrian people know their way) is an anonymous collective of Syrian artists. The group produces posters digitally that are circulated via Facebook and other social media platforms for activists to download and print for demonstrations. The posters are not just artworks but also physical, political objects and involve the interaction of the audience to move them from the digital to the physical dimension. Amongst the prints screaming faces, propaganda statements, people in cages and a bleeding Syrian flag can be seen. These works have been given titles like Prepare for Rebellion, Freedom, Self-defense is a legal right and The struggled for our sake. Let’s struggle for their freedom. The images are deeply powerful, and even viewers who do not read or understand Arabic can understand the scale of emotion and importance that these highly-charged images – blazon with Arabic slogans – represent.

A slightly more optimistic illustration of contemporary Syria is seen in Fadi Yazigi’s distorted images on rice paper: ‘I aim to capture people’s emotions and expressions, be it happiness of sadness’, he is quoted as saying. Across one image eight characters appear in contorted positions, their poses are strained but there are gentle smiles on their faces. There is still a glimmer of hope across their lips. ‘I can’t stop working; art is not only part of my survival – it’s also a way of looking for a solution.’ Yazigi still resides in Damascus, his use of rice paper as a medium upon which to make his work reflects this very ethos of art surviving through hardship, where art supplies are limited and even items as basic as paper are hard to come by. His figures appear to be thriving. Despite their bent, contorted positions a woman carries a child on her back while next to her man has mounted a horse. Undeterred by their stiff poses, each of the characters appears to be mid-movement, they have not been reduced to static entities: they are living beings.

Similarly to Yazigi’s characters, Sulafa Hijazi’s work comes in the form of a digital print, which shows a married couple on their wedding day, with their faces covered by a gasmask. What is the message she is trying to convey? Is the image one of survival? Perhaps this display of a bride and groom shows love prospering through war, but still, they need these gasmasks to go through with their nuptials. They stand resilient, thanks to their breathing aids.

Rami Ali (fashion designer) ‘From now on we will wear what we sew.’ From the ‘Resurrection’ series. 2012.  © The artist

Jaber Al Azmeh, Alma Entabli (journalist) ‘The mask has fallen.’ From the ‘Resurrection’ series. 2012.  © The artist

Encompassed in the definition of ‘works on paper’ is the medium of photography. Jaber Al Azmeh’s ongoing Resurrection series consists of photographs of prominent Syrian figures – journalists, actors and poets – all holding a copy of al-Ba’ath (resurrection), the official government newspaper. In each photograph the subject is clutching onto the paper in their own unique way. In From now on we will wear what we sew, 2017, fashion designer Rami Ali has cut the journal into the shape of a t-shirt, meanwhile The mask has fallen, 2017, shows journalist Alma Entabli hold her copy so that it covers half of her face as she sits next to a series of masks on the wall. Perhaps the most provocative image shows artist Youssef Abdalke poke his finger through a hole that he has made in the newspaper. Throughout the series the subject uses the newspaper as a canvas on which to voice their opinion of their national situation. Besides Al Azmeh’s work lies a charcoal drawing by Youssef Abdelke. The image, entitled Sardine, 2014, shows a single fish trapped inside a small box with no means of escape. The tiny case in which the sardine has been locked mirrors the entrapment felt by the Syrian people, and its appearance in black and white evokes a sense of darkness that reflects their situation. 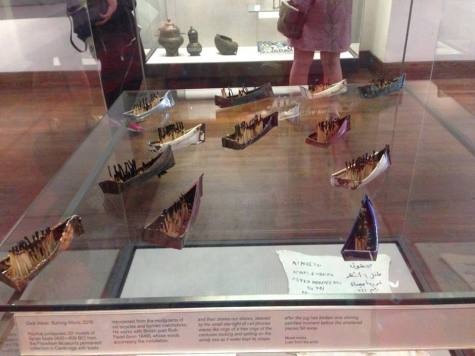 In addition to the two-dimensional artworks in the exhibition, is a display of the sculptural work of Issam Kourbaj. The striking Dark Water, Burning World, 2016, consists of a cluster of miniature boats that have been made out of burned matchsticks and the mudguards of old bicycles. The fleet represents the journeys that many Syrians make by water in a desperate bid to escape their homeland, with the material used stressing the severity of the situation. Alongside these vehicles is Lost, 2016, a startling group of objects that appear like phantoms. The work consists of clothes dipped in plaster that have then been written on top of in both Arabic and Greek. The resulting garments are effectively ghosts. They are lifeless. What they represent is true horror: the memory of children lost while attempting to reach safety, in this case, Lesbos.

The British Museum display is a stark presentation of the Syrian situation. Predominantly through paper, the exhibition represents the versatility of the material in its ability to communicate a history that is living, and that speaks of its time, allowing the audience to reflect on the contemporary politics affecting Syria through the eyes of artists directly affected by the war.

Living histories: recent acquisitions of works on paper by contemporary Arab artists is on display at British Museum until 22nd October