Fire. One of the four elements. The one that has the power to scorch, destroy and ruin. To look at, it is spellbinding, a red-yellow-orange flame that transfixes as it burns. But through destruction fire also brings light and the opportunity for renewal. In Building with Fire Jean Boghossian uses fire as an artistic medium, creating work that breathes life into the L’Orient Le Jour Building, a huge structure that was damaged by the Lebanese Civil War.

The L’Orient Le Jour Building lies large and abandoned in the heart of the Beirut Souks, a trendy shopping area in the downtown area of the Lebanese capital. Once the headquarters of the French-language L’Orient Le Jour Newspaper, the premises are now empty as a result of being wounded during the Lebanese Civil War, and is covered in bullet holes and broken down walls. Yet, while it has succumb to decay, the L’Orient Le Jour Building carries an atmosphere of grace and beauty, which has been amplified by the presence of the work of Jean Boghossian (b. 1949, Aleppo), a Lebanese artist who works predominantly with fire.

“Fire tamed me, chose me, I am its medium, its revealer.” – Jean Boghossian

Though one might expect fire to add to the damage that the building has already suffered, Boghossian’s work seems to compliment its aesthetic. It commands the space, while making sure that the viewer’s attention is also on the walls that the work is displayed against. While some work explicitly references destruction through holes burnt in the middle of canvases and the scorched pages of books, elsewhere the use of fire is more subtle in the presence of paintings that comprise pigments that run into one another. On one wall Boghossian has written: “The labyrinth is my life.” The whole building is like a maze, with every floor being covered in art, offering a space of visual respite from the remnants of war. 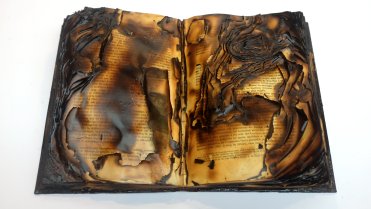 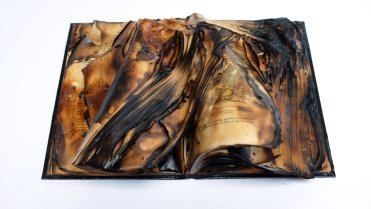 “Fire is a violent element, but I decide to use it out of its context. I render it constructive by making art with it. This way, the books that I burn become sculptures.” – Jean Boghossian

Perhaps the most beguiling works are not actually on canvas or hung on the walls at all. In fact, they don’t involve adding traditional mediums like paint to an object; instead, they are the result of demolition, using fire to pull down what they once were in a previous life. A number of books are that have been subjected to a blaze are displayed on plinth, being rescued before disintegrating altogether. The volumes, though almost destroyed, seem to glow. The fire has been blown out, but the heat remains. The text is unreadable, but that doesn’t matter, the stories the books tell now are of survival and rebirth. They are textual no longer, but visual accounts of the building’s history and future. 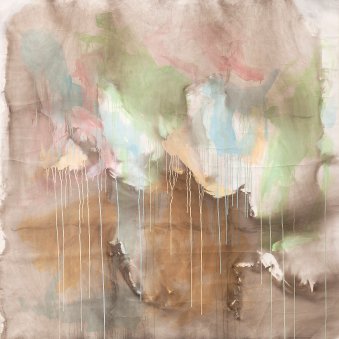 In addition to the books are a number of works on canvas. Many of these are not the earthy colours left behind by heat. In fact, one sees an array of pastels across the L’Orient Le Jour Building: greens, pinks and purples. The abstract works cover every part of the building, showing that art can be admired even in the wake of destruction. The pigments have been allowed to drip down mixing together to make unique patterns, while others have been given a final touch thanks to treatment from smoke and a blowtorch. Some of the works are highly textured – the result of the formation of cracks and fissures where they have been struck with heat allowing the pigments to slide over the surfaces and fill in the fractures within the canvas. 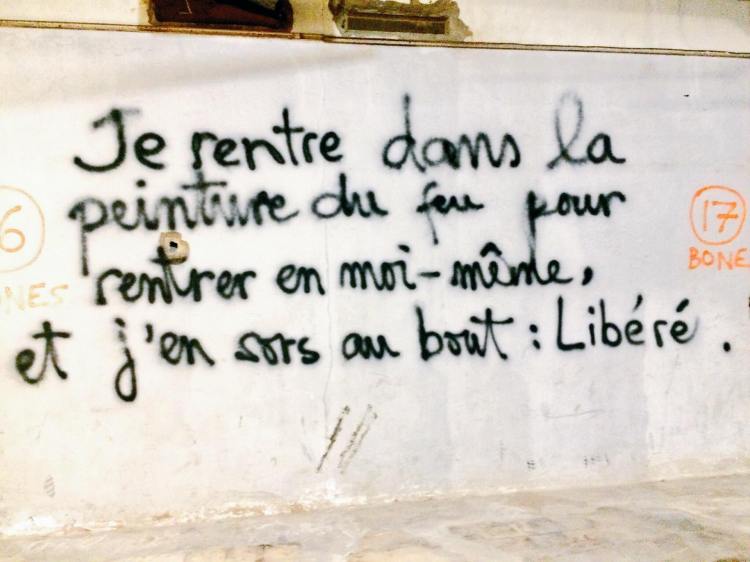 “I enter the painting of fire to return to myself, and I leave at the end: liberated.” – Jean Boghossian

The above statement is spray-painted on one of the walls of the L’Orient Le Jour Building. Despite the sense of renewal throughout Boghossian’s paintings, it is impossible to escape the atrocities of war and its direct consequences on Beirut’s architecture when standing inside it. Yet, like a phoenix rising from the ashes, the fire-treated artworks provide an atmosphere of reconciliation, acknowledging the past through reincarnation.