An apple and a snake: two motifs synonymous with Adam and Eve’s rebellion in the Garden of Eden. The Christian doctrine of the original sin – i.e. the consumption of the forbidden fruit from the tree of knowledge of good and evil – is described in the Book of Genesis of the Hebrew Bible. In the biblical tale the serpent is accused for deceiving Eve into eating an apple from the prohibited tree, and subsequently sharing it with Adam. Images of the slippery serpent, along with the alluring yet outlawed apple, recur constantly in dear diary, an exhibition of Katja Seib’s paintings at Sadie Coles HQ. 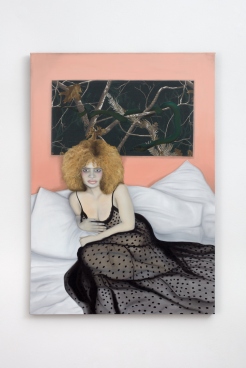 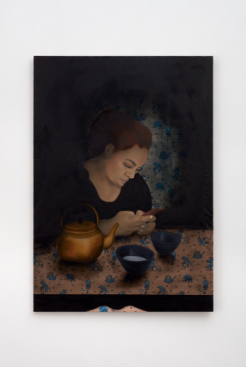 Dear diary is spread across two exhibition spaces. Downstairs, on street level, the works are large scale, mostly oil paint on various textiles. Perhaps the most striking image is Eve’s curse (2018, oil on textile), where a woman rests – though not to comfortably – on a bed. She wears a sheer black slip-dress, in which her translucent skin – as pale as a ghost – can be seen completely. The sitter has thick curly, bushy hair, and strikingly pink cheeks. Her somewhat peculiar appearance is probably down to the fact that “Eve” is not one single person, but a composite fictional character based on a number of models. In the background is a dark painting, where a green snake curls its body around the branches of a spindly tree, its face turned towards “Eve”. “Eve” however seems oblivious to the creature, looking away into the distance, however, if one looks close enough, they will be able to see the logo of the Apple computer and phone company under her skin.

The subtlety of the influence of technology in Eve is much more direct in Girl with a teapot (2018, oil on textile). Within the image, a woman can be seen playing on her mobile telephone while seated at a table. The glare of the LED screen is the only light source in the picture. The found textile on which Seib has painted has been coloured in such a way that it functions as both wallpaper and tablecloth, with the cups on the table making the viewer feel like a participant within the scene. The phone recurs again in Reality and dream (2018, oil and acrylic on hessian), where two characters are now present. Sitting opposite at a table, one figure touches the iPhone with her left hand while waving her right in the face of her companion, around which a green haze has been emitted. It is as though she is playing some kind of spell on her opponent. Above the pair, an angel with an arrow can be made out. And, while he looks like cupid, he has shot the arrow in his eye, and not at the couple sitting beneath him. Romance reinterpreted. 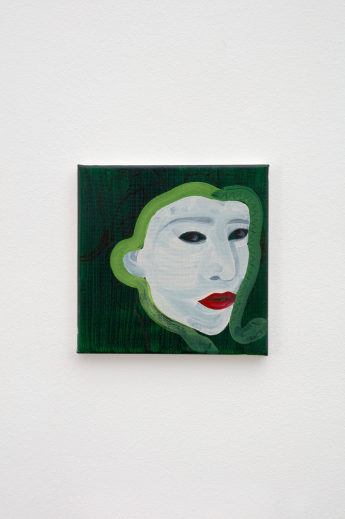 Going up the stairs between the lower and upper galleries, a green apple hangs from the ceiling. The face of a woman has been drawn onto its shiny surface as it floats between two smaller paintings, on one the word “hell” has been painted, while on the other is the word “there” beneath an image of a serpent. Upstairs is a sequence of smaller paintings based on photographs of people Seib has met in Los Angeles, where she lives. The portraits oscillate between real life characters and mythical creatures. Even the images’ titles suggest that the people are not real: Pandora’s Box (2018, oil and acrylic on canvas) and Medusa (2018, oil and acrylic on canvas). Medusa however, is in fact a self-portrait of the artist in a baseball cap, on top of which a green snake has chosen to make its home.

Amongst the images upstairs multiple faces can be seen morphing in to one another. Lucid figurations, anime style drawings appear on top of faded, washed out portraits. In one image, a girl can be seen taking a selfie with an iPhone, while in another a purple serpent stretches itself out across four square panels. Seib also includes some text in her paintings here too: “girls/girls/girls boys/boys/boys”, “blue” and “hell is not a place/hell is not a certain evil/hell is other people”. It doesn’t seem to make sense and it is likely that the words are the results of random ramblings and thoughts from inside the artist’s mind. Perhaps, these smaller paintings, which appear to have been made quickly and probably without too much contemplation, are diary entries, explaining the titling of the exhibition.

The serpent can symbolize death, immortality, procreation and wisdom. The apple meanwhile, is often a symbol of fertility. In the case of Katja Seib’s diary however, I’m not sure that the fruit or the snake are meant to represent any of those things. Seib reinterprets both emblems under the hazy artificial glow of an iPhone, translating a story that originated in the Bible for a twenty-first century audience.