Fatima Ronquillo’s paintings look like they were painted hundreds of years ago. Classical in style, and full of cherub-faced characters adorned in lace masks, flowers, animals and lovers eyes – a Georgian motif made popular in the late eighteenth century – it is hard to believe that Ronquillo’s paintings are being made in Santa Fe, New Mexico in 2019. During a time when contemporary art tends to look to the future, there is something quite comforting in the traditional style – which tends to look to the past – of Ronquillo’s work. Gallery Girl spoke to Ronquillo about symbolism, inspirations and art history.

Growing up in the Philippines, Ronquillo attended a Catholic school, which is where she says her visual vocabulary began. “I remember the feast days of saints along with other Catholic iconography found in the old churches and private homes”, she says, “I sometimes think that I have always painted the faces of saints.” It is fitting therefore, that she now lives in Santa Fe, New Mexico, as the town has a similar artistic tradition, including the art of the “santero” – artists who make Spanish style religious artworks. And, while many of her works don’t look overtly religious, some of them have been clearly inspired by Christianity. Crowned Nun with Marmoset (oil on linen, 2018) for example, depicts a beautiful woman in a nun’s habit, cradling a marmoset with a bouquet of flowers resting on the top of her head.

As though from the past, paintings like Juno and the Peacock (oil on canvas, 2018) reference historical paintings. The work is filled with symbolism, from the fruit she is waving with her hands, to the peacock laying in front of her. Even the woman’s name – Juno – references Greek mythology. “I am a lover of art history and my works always reference something from the past”, she explains, with Homecoming (oil on linen, 2018), also appearing like a scene from Greek or Roman mythology. “I sample from many different time periods, and I have a current fondness for the Rococo of Watteau and Oudry, as well as the 19th century American naturalist painters like Audubon and Martin Johnson Heade”, she adds, “For the past couple of years, I have also been fascinated by the gods and heroes of Greek mythology, with their tales of transfiguration and symbolism.”

Given the abundance of art historical references in Ronquillo’s paintings, it’s interesting to learn that she never went to museums when she was growing up. “As a child growing up in a small province in the Philippines, I did not have access to museums and could only imagine what the great paintings looked like.” Thus she taught herself to draw by looking at art books. And, while she doesn’t research formally, she explains that she puts visual references together as though putting together a scrapbook. Thus, works like Hermes with Billet Doux (oil on panel, 2018), includes a lover’s eye, references to the Greek God Hermes, and the uniform of a European nobleman. 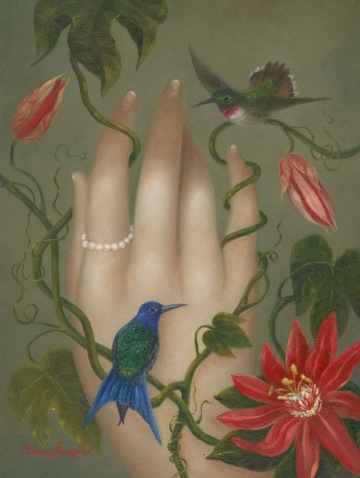 The people in Ronquillo’s paintings are imaginary. “They are portraits of an idea of a person, such as someone in love or in mourning”, she says, “Or a character in literature, theatre or opera.” So it seems, while we may be intrigued by the people in her works, who appear so full of history, we will never really know them. That said, we can learn a lot from the way in which they have been painted. Works like Hand with Ode to Martin Johnson Head (oil on panel, 2019) for instance, are full of flowers and animals, which allude to other meanings. “Symbolism is very much present in my work”, explains Ronquillo, “Images of flora often carry meanings found in the Victorian language of flowers, where an individual flower symbolizes an emotion, for example a tulip means ‘a declaration of love’.” Symbolism helps in crafting a narrative, however, Ronquillo keeps the meanings of her paintings open, never revealing their intentions in the hope that they evoke something personal to each viewer.

One symbol that does repeat itself often within her work however is the lover’s eye, something that became fashionable in the late 18th century as tokens of secret love. Their meanings changed altogether in the Victorian era when they became symbols of mourning. “A portrait’s gaze holds a viewer. The eye is a very important motif in my work because it is suggestive of thought and idea”, says Ronquillo, “I have been obsessed with the Georgian lover’s eye portraits ever since I learned of them.” A particularly striking work featuring this object is St. Lucy (oil on panel, 2019), where the portrait of a seemingly nude woman looks upwards with one eye closed, as blood drips from it, and a blood covered, golden knife is held in her right hand. Around her neck a blue lover’s eye sits amongst a string of glistening pearls. The work is at once violent and gentle, with the intense inclusion of the knife and blood juxtaposed against the childlike face, soft pearls, and translucent skin of the woman in the picture. St Lucy was a Christian martyr, who had her eyes gouged out before being executed for her faith. “The surreal aspect of an isolated lover’s eye captivates me with its touch of eeriness―the idea of a physical dismemberment signifies a removal or estrangement of a loved one”, explains Ronquillo, “In terms of composition, the framed ornamental eye provides context and a reason for adding a third or fourth eye in a painting. It is a device of conceit: a portrait within a portrait.”

Ronquillo’s artworks invite her viewers into a magical world, transporting them back in time to a world of mystery, full of symbols waiting to be discovered. She has just released her first book Spellbound – a ten year retrospective of her paintings – and, as for the future she says: “I have all these paintings in my head that I’ve been wanting to put on canvas, some of them are ideas which have been germinating or lying dormant for years.” Gallery Girl for one, can’t wait to see just what these ideas are.